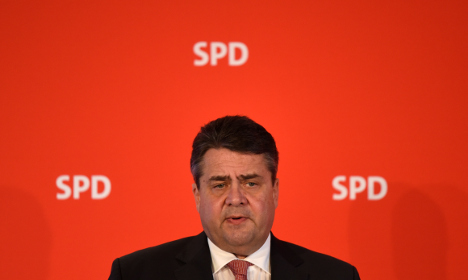 Broadcaster Bayerischer Rundfunk cited an unnamed source claiming that Gabriel would step down, leaving his post for Hamburg mayor Olaf Scholz, the latest in a string of speculation about the party's leadership.

Justice Minister Heiko Maas, who is also a Social Democrat, told public broadcaster ARD that “it is such nonsense that one can't even find the right way to deny it”.

The SPD's deputy chief Ralf Stegner also said on Twitter that the Bavarian broadcaster's journalist “has had a bit too much sun in Munich.”

Rumours have been swirling about who the SPD would field as its leading candidate for the 2017 general elections.

The party suffered a disastrous showing in state elections in March, when it scored behind the populist upstart party Alternative for Germany (AfD) in two out of three states.

Latest opinion polls by Stern magazine put support for the party at 21 percent, after Merkel's Christian Democrats at 34 percent.

On Sunday, Bild am Sonntag newspaper reported that Gabriel was planning to postpone the announcement of the party's leading candidate for next year's general elections to next May, rather than in the beginning of 2017.

The delay would allow the party to take stock of next May's state elections for North Rhine-Westphalia — Germany's most populous state —  before deciding whether it needed a drastic leadership shakeup, Bild am Sonntag reported, quoting an unnamed high-ranking SPD official.

Gabriel, who is vice-chancellor and also economy minister, had in October announced his intention of seeking Germany's top job.

“Of course I want to become chancellor, if the SPD decides to pick me for it,” he told Stern magazine in an interview.