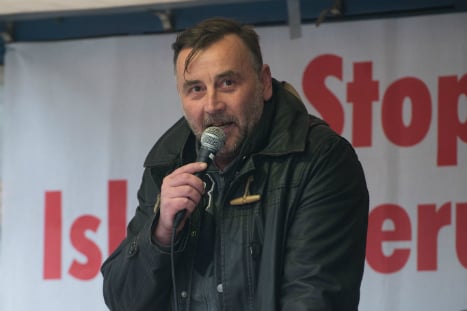 The founder of the far-right “Patriotic Europeans Against the Islamization of the West” (Pegida) movement, was first charged in October with inciting hatred through a series of widely-shared Facebook posts.

After the court ruling on Tuesday, he will now have to a pay a fine of €9,600 for writing a series of comments about refugees on Facebook in which he described them as “cattle” and “scum”.

The trial was held under tight security in Dresden in the former communist East, the birthplace of Pegida, which bitterly opposes Chancellor Angela Merkel's liberal migration policy that brought more than a million asylum seekers to Germany last year.

The 43-year-old, who has previously been found guilty of drug dealing and theft, denied that he had written the posts, a defence which was rejected by the court.

The prosecution had argued for a seven-month jail term.

When Pegida began in 2014, the group initially drew just a few hundred supporters to demonstrations in Dresden, before gaining strength and peaking with rallies of up to 25,000 people in early 2015.

Interest subsequently began to wane following wide coverage of Bachmann's overtly-racist comments and the surfacing of “selfies” in which he sported a Hitler-style moustache and hairstyle.

Bachmann has repeatedly labelled refugees “criminal invaders” while also railing against “traitor” politicians and the “lying press”, whom he blames for jointly promoting multiculturalism.