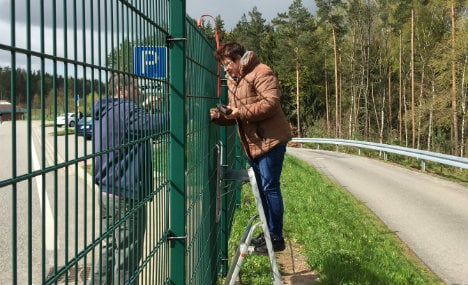 “Three bratwurst,” someone calls from ten metres away.

Three men are standing behind a green metal fence at an Autobahn rest stop in Thuringia, central Germany.

“With mustard?” Christina Wagner calls back.

She takes the sausages from the grill, sticks each in a separate bun, and places them tidily in a wicker basket.

Then she walks over to the fence, climbs a ladder that's propped up next to it, takes their cash, and passes down the basket.

“That’s crazy, really stupid,” one of the three men reflects, looking at the fence. Another describes it as “bureaucratic madness”.

It’s the same process the 53-year-old Wagner goes through countless times every day.

Some customers ask if there is a hidden camera somewhere, thinking they are being filmed for a comedy show, Wagner says.

The fence has even proved dangerous. In 2012, a young man badly injured himself after he climbed over it to try and get to the restaurant. According to police he got a ring stuck in the wire and pulled a finger off.

Wagner bought the restaurant in 2009 and moved with her husband and three children from Karlsruhe in southwestern Germany to start a new life in the former East German state of Thuringia.

But when she acquired the premises, the state's Office for Transport had already taken away it's sales licence.

As far as Wagner sees it, the state tricked her into the purchase so that they could make money off the real estate.

“We were hoodwinked so that they could sell the building. We certainly didn’t buy it because we wanted to live by the Autobahn,” she says.

When she started selling hot snacks to drivers taking a break from the road, Thuringian authorities built the fence around the restaurant in order to literally cut off her business.

After Wagner bought her ladder and kept selling her snacks, state authorities demanded that she pay a fine.

With both parties refusing to back down, the case is going to court starting on Tuesday in Gera.

'It's nothing personal, it’s just the law' Markus Brämer, director of the State Transport Office in Thuringia, sees no problem with the department's decision.

The licence ran out in 2004, he states, arguing that there are plenty of service stations on that stretch of road already and there’s no need for one more.

“The Wagner family can sell their food to people walking in the forest, but they’re not allowed to sell it to people driving down the motorway,” he says. “It's nothing personal, it’s just the law.”

But for Wagner, the decision to take away the licence from such a historic rest stop in the first place was a wrong.

When the restaurant opened in 1936, it became the first place in Germany – indeed probably in the whole of Europe – where motorists could take a break from the tedium of the road and enjoy a hot meal.

In the time of the GDR, due to its proximity to the border, it served people travelling from the democratic West into communist East Germany.

“It’s certainly ironic that there is now a fence there,” says Wagner who herself moved from the West to buy the business.

She insists she won’t give in, regardless of how the court decides the case.

“Even if I lose I’m not going to pay the fine. I’m a free citizen in a free country. They can arrest me – the mother of three children – right here at the fence.”