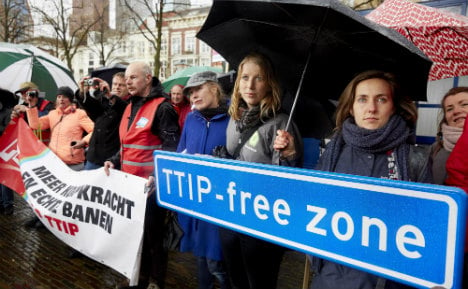 The campaign group published 248 pages online to “shine a light” on the closed-door talks to forge a so-called Transatlantic Trade and Investment Partnership (TTIP), which would be the world's largest bilateral trade and investment agreement.

“This treaty is threatening to have far reaching implications for the environment and the lives of more than 800 million citizens in the EU and US,” said Greenpeace as it presented the documents in Berlin.

Both Washington and Brussels want the mega-deal completed this year before US President Barack Obama leaves office, but the agreement in the making has faced mounting opposition on both sides of the Atlantic.

In Europe there is deep suspicion that TTIP will erode social, ecological and consumer protections to the advantage of big business, while the US has also seen rising protectionist sentiment.

Greenpeace said the papers show, for example, that the US wants to be able to scrap existing EU rules in areas such as food labelling or approval of dangerous chemicals if it they spell barriers to free trade.

“TTIP is about a huge transfer of power from people to big business,” the group argued, having also projected an image of a classified text passage onto the facade of Berlin's parliament building.

In Brussels, Trade Commissioner Cecilia Malmstroem insisted that the papers “reflect each side's negotiating position, nothing else. And it shouldn't come as a surprise that there are areas where the EU and the US have different views”.

“It begs to be said, again and again: no EU trade agreement will ever lower our level of protection of consumers, or food safety, or of the environment,” Malmstrom said in a blog.

Greenpeace said the cache, a snapshot from ongoing talks, represents two-thirds of the TTIP draft text as of the latest round of talks in April, and covers a range of sectors from telecoms to autos to agriculture.

Germany's Süddeutsche Zeitung daily, which received the documents early, said they indeed “show that the opponents' fears are not unfounded … They show that the reality of the negotiations is worse than these dark forebodings.”

The Munich-based daily said the papers show that the US side is trying to use the carrot of easing restrictions on auto imports from Europe for concessions on its agricultural exports, perhaps including genetically modified foods.

The Süddeutsche – the paper behind the publication of the so-called “Panama Papers” – also charged that some political leaders who publicly defend TTIP “either don't know the status of negotiations, or are deliberately leaving the public in the dark”.

The newspaper focussed on a controversial TTIP proposal to set up private investor courts that would allow multinational companies to sue governments if they deem public policy to hinder fair competition.

While Brussels and Berlin had suggested, after strong opposition, that the investor courts are off the table, the newspaper said that “that was not and is not true”.

Although the EU had made such a proposal, “the Americans flatly rejected it” and the issue had not been seriously negotiated yet.

TTIP is billed as a free-trade deal for the 21st century, focused on harmonising regulations, lowering barriers on investment, opening access to government contracts and addressing new areas like data trade.

Following the latest negotiations last month, US and EU said they had made progress but “substantial work” remained to agree a deal in 2016.

They said that while 97 percent of tariff issues had been covered, three percent — the most challenging, including for farm products — remained.

French newspaper Le Monde, which also had access to the leaked documents early, said they showed that “the Europeans [are] more involved and more interested in negotiations” than the Americans, whose stance it described as “reluctant”.

Greenpeace said the confidential documents prove that long-standing environmental protections are being ignored and that, for example, there is no mention at all in the proposed text of global goals to reduce greenhouse gas emissions.

“These leaked documents confirm what we have been saying for a long time,” said Greenpeace EU director Jorgo Riss. “TTIP would put corporations at the centre of policy-making, to the detriment of environment and public health.”