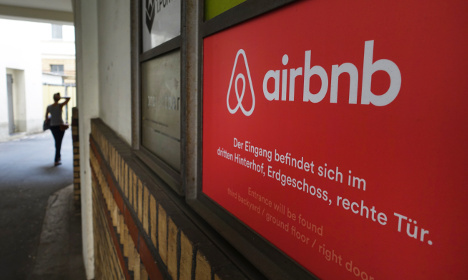 The German capital fears that the growing trend of people letting out apartments to tourists through sites such as Airbnb, Wimdu and 9Flats is cutting into a limited property supply and driving up rents.

From May 1st, the city-state will enact a new law known by the German mouthful of “Zweckentfremdungsverbot”, or prohibition of improper use.

It is “a necessary and sensible instrument against the housing shortage in Berlin,” said Andreas Geisel, Berlin's head of urban development.

“I am absolutely determined to return such misappropriated apartments to the people of Berlin and to newcomers,” he said.

Rents in Berlin shot up 56 percent between 2009 and 2014, although at around 10 euros per square metre this year, they are relatively low compared to other major European cities.

Given that it is more profitable to rent out whole apartments for short holiday lets, some investors are holding on to apartments for such rentals rather than having long-term tenants.

San Francisco-based Airbnb.com — short for the business's original name AirBed & Breakfast — is the biggest of several sites that allow people to offer and find such rental accommodation worldwide.

While Berlin has become one of Europe's top travel destinations, with 30.2 million overnight stays last year, the Airbnb trend has also impacted the local hotel industry.

According to research firm GBI, the private online bookings represent a “parallel market of an additional 6.1 million” overnight stays a year.

The new law was passed in 2014 and provided for a two-year transition period that ended on April 30, after which owners are only allowed to rent out rooms via such portals, not entire flats or houses.

To catch them, the city has even appealed to the “civic spirit” of its residents and asked them to anonymously report any suspected misuse online.

Tim Boening, a 41-year-old artists' agent who rents out a loft in the trendy Kreuzberg district, said he wasn't shocked by the new law, given the practices he has witnessed.

There is, for example, “the nice couple with two small apartments who move in together into a bigger place and keep the two apartments to rent them out on Airbnb,” he told AFP.

“I don't think that's good, it should be stopped,” he said, as these apartments are not available to “normal” tenants.

Marika, 48, couldn't agree less and is furious about the change, having long rented out four apartments near the centre of Berlin via Airbnb.

She believed that the city is making Berliners pay for its failed housing policy while serving the needs of the hotel industry.

“This is unfair, we are forbidden from doing our work,” said Marika — not her real name.

The only impact, she argued, would be that some groups, especially families, will simply stay away.

She was especially angry about the request to turn in offenders, saying that “in Germany, of all places, maybe we should reconsider this kind of thing,” in reference to the Nazi and former East German communist dictatorship in which denouncing others was common practice.

Airbnb Germany said “Berliners want clear and simple rules for home sharing, so they can continue to share their own home with guests”.

The practice differs from other types of accommodation “and helps many Berliners pay their rent,” spokesman Julian Trautwein told AFP in a statement.

“We will continue to encourage Berlin policy-makers to listen to their citizens and to follow the example of other big cities such as Paris, London, Amsterdam or Hamburg and create new, clear rules for normal people who are sharing their own homes.”

Wimdu has meanwhile filed a suit, arguing the law breaches the constitution of the city-state of Berlin.

And the owners of start-up 9Flats said they had sold the brand to a Singapore company.

“We face a law in Berlin that would drive us into bankruptcy,” its boss Roman Bach told the daily Frankfurter Allgemeine Zeitung.

Several property owners who use Airbnb have formed the “Apartments Allianz” to push back against the charge they are evil capitalists growing rich on the backs of fellow Berliners.

Rather, they say, they have offered “an attractive, varied range of beautiful and individual apartments”, and have through their personal hospitality “significantly contributed to a positive image for Berlin”.

They say they are “not international players, but working in Berlin for Berlin”.