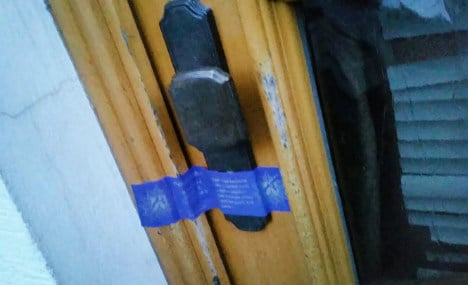 Police tape off an area of the farm house. Photo: DPA

A couple in their mid-forties had lured the 41-year-old to their home in Höxter before imprisoning her in the cellar, investigators suspect.

“The woman died through brutal violence,” a prosecutor told the Westfalen-Blatt. “The autopsy revealed that the victim died of blunt-force trauma against the head”.

There are reportedly no indications of sexual violence being involved. Nor would prosecutors say anything about the motives of the perpetrators.

The victim had responded to an advert in a newspaper, in which the man had written that he was looking for a woman for a stable relationship.

After a short period in which the two got to know each other, the victim moved to Höxter from her home in Bad Gandersheim.

There the man was still living with his ex-wife in a farmhouse.

On Thursday the man was travelling with his severely beaten captive when his car broke down.

Due to the woman’s poor state of health the pair called an ambulance which transported her to hospital, but she died within two hours.

Neighbours have told Bild that the woman had long hair when she first arrived at the farm, but suddenly appeared with a shaved head.

They also describe how they often saw the couple dragging the woman into a car at night and driving away.

The landlord told Bild that the couple had moved into the house five years earlier, always paid in cash and had claimed that they were siblings.

This is the second case of forced captivity to make headlines in Germany in weeks.

Earlier in April police found a 26-year-old woman locked in a room in a flat in Rosenheim. Investigators believe that her mother had imprisoned her and that she could have been in captivity for years.