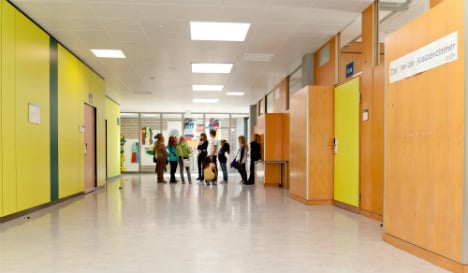 Prosecutors in Kleve are investigating why exactly the principal at Kamp-Lintfort high school instructed the 13-year-old students from the nearby Europa School to take their clothes off in front of him.

The principal has said that he suspected the boys of stealing from the changing rooms in the school’s sports hall.

The boys insist that they had not stolen anything.

“The boys’ parents have made a legal complaint due to a crime of coercion. We have taken up the case and are investigating the accusations,” a spokesperson for the prosecution said.

Investigators have not yet questioned the teacher. But they do not believe that there was a sexual motive involved, the spokesperson said, adding that the case more likely involved stolen goods.

The two teenagers were discovered in the sports hall by a teacher, who, suspecting them of theft, brought them to the principal.

One of the students told broadcaster WDR, “he asked us again if we'd stolen anything. We said we hadn’t and let him see inside our bags.”

“But that wasn’t enough for him and he gave us the choice: either we strip off or he’d call the police,” the boy continued. “My heart was racing. I didn’t know what was going to happen, He’d said ‘take your clothes off or I’ll call the police.”

The unfortunate pair then stripped down to their underwear. But even this wasn’t enough for the principal, who ordered them to strip completely naked.

“We laughed, thinking he was joking,” the boy told WDR. “But then he counted 'three, two, one…'”

While all this was going on, other pupils entered the office as they were stripping naked – adding to the sense of humiliation, the student recounted.

Jochen Gutermuth, the lawyer representing the parents told the Rheinische Post that “even the accusation of theft was pulled out of thin air. There was no proof for it – no-one had reported anything missing.”

“The threat to call the police was also baseless,” the lawyer added.

The incident appears to have taken place several weeks ago, but prosecutors only took up the case on Wednesday, at first reportedly not believing it to be worthy of investigation.

Only after Gutermuth complained to the city prosecutors in Düsseldorf was the case finally taken up.