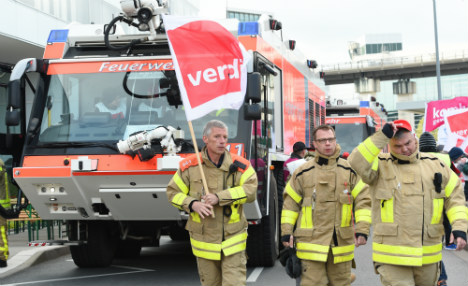 Airport firefighters in Frankfurt stand in front of their fire engine with a Verdi union banner. Photo: DPA

Runways have had to be closed at Frankfurt Airport – Germany's largest and busiest air hub – as groups including airport firefighters and baggage handlers joined the strikes, which were called by service workers' union Verdi to secure better pay in the public sector.

The strikes have also hit other areas of public sector work, including healthcare, kindergartens and street cleaning.

Europe's biggest airline Lufthansa had already announced on Tuesday that 895 flights – 60 percent of its daily services – would be cancelled across the country.

At Frankfurt just two of the four runways were in operation, a spokesman said, after firefighters walked out. By 9:00 am a total of 392 flights had been struck off.

Dozens of flights have had to be cancelled at other airports including Munich, Cologne/Bonn, Bremen, Hamburg, Berlin's two airports Tegel and Schönefeld, Hanover, Düsseldorf and Dortmund.

Cologne/Bonn has so far seen 103 flights cancelled, along with 48 in Düsseldorf, a total of 25 across Hanover and Bremen, 31 in Hamburg, and 99 across Berlin's two airports.

All passengers are advised to check with their airlines before leaving for the airport on Wednesday – here are links for some of the largest German airlines:

“I hope that this signal has been understood, and that we can reach an agreement at our third round of negotiations on Thursday and Friday,” Verdi leader Frank Bsirske told the Süddeutsche Zeitung on Wednesday.

But the strikes have caused anger among political leaders in Berlin and frustration for passengers.

“There are no reasonable grounds for striking important airports and Berlin's hospitals,” Interior Minister Thomas de Maizière said in a statement. “The unions are only hurting bystanders.”

Workers have demanded wage increases of up to six percent after rejecting public sector employers' offer of a three-percent increase and other concessions.

Bsirske said that the employers' offer wasn't as good as it looked, and amounted to less than two percent over two years.