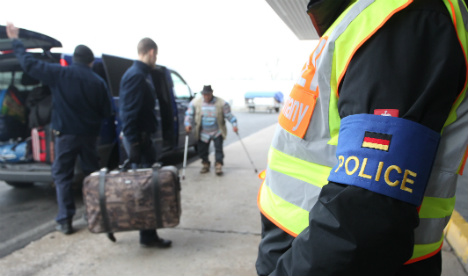 A policeman looks on as refused asylum seekers are deported to Tunisia in November 2015. Photo: DPA

Compared with the 3,356 new arrivals from Morocco, Tunisia and Algeria in January, the number entering Germany in March fell to 480 – one-seventh as many.

The figures come from a report sent from the Federal Office of Migration and Refugees (BAMF) to lawmakers and seen by the Westdeutsche Allgemeine Zeitung (WAZ).

Migrants from North Africa have been in the spotlight in Germany since New Year, when members of a crowd of mostly North African men gathered at Cologne's main train station committed large numbers of sexual assaults and petty thefts against women.

Outrage over the crimes pushed politicians towards classifying Morocco, Tunisia and Algeria as “safe countries of origin” – whose citizens would not be able to claim asylum in Germany.

“The discussion alone in January about introducing the law led to a tangible reduction in new arrivals,” the internal BAMF report reads, claiming that public debate in Germany had “sent a message”.

Meanwhile, the government has engaged in frantic diplomacy in a bid to get all three Maghreb countries to take back rejected asylum seekers.

BAMF officials' belief in the “deterrent effect” of the law will work in the government's favour, as Green Party politicians had demanded evidence that it would work before supporting the law in the Bundesrat (Germany's upper house of parliament).

But human rights activists say that the law will hurt thousands of people who could have good grounds to claim asylum.

“The new law will enable such a fast process that it will by necessity lead to wrong decisions,” Amnesty International wrote in a sample letter members could send to their MPs in February.

Labelling Morocco, Tunisia and Algeria as safe countries of origin “would make it almost impossible to prove persecution,” the NGO added.

Figures from the report show 26,036 new arrivals from North Africa in Germany in the whole of 2015.

But the number of those people who had their asylum applications granted was just 2.1 percent – the lowest rate for any country or region of origin.

In the first quarter of 2016 the ratio of successful applications has fell even further, to just 0.7 percent.

“In practice, [the new law] will lead to a minimization of the number of unjustified asylum applications from Morocco, Algeria and Tunisia,” the report suggests.

It further argues that “two-thirds of cases [involving North Africans] are obviously unfounded”.