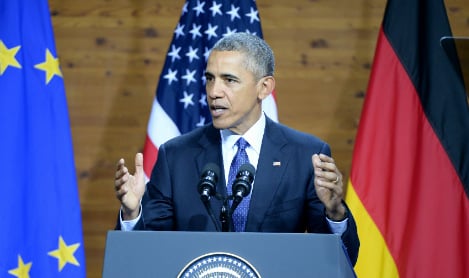 President Obama stands in front of European, US and German flags at the Hannover Messe on Monday. Photo: DPA

On what is expected to be his last visit to Germany as President, Obama told an audience in Hanover that Europeans ought not to allow the different crises facing the world to scare them away from their values.

“I've come here today to the heart of Europe to say that the United States and the entire world needs a strong and prosperous and democratic and united Europe,” he said in an opening address at the Hanover Messe – the world's biggest industry fair.

Quoting a 1954 speech by Germany's first post-war Chancellor, Konrad Adenauer, he insisted that “the unity of Europe was a dream of a few. It became a hope for many. Today it is a necessity for us all.”

Obama ticked off a checklist of successes to highlight the strength of US-EU co-operation – from the historic achievements of bringing a peaceful end to the Cold War, to overcoming the financial crisis, the Iran nuclear deal, the Paris climate change agreement and many others.

“That's what's possible when Europe and America stand as one,” he proclaimed.

And he praised Chancellor Angela Merkel “and others who have eloquently reminded us that we cannot turn our backs on our fellow human beings who are here now and who need help now” in the refugee crisis.

But there were flashes of annoyance in a second laundry list of areas where Europe had to do better.

“Sometimes Europe has been complacent about its own defence,” Obama complained, noting that few European countries meet NATO military spending targets of two percent of gross domestic product (GDP) – leaving the US to pick up the slack.

He called on the EU to do more to aid the fight against Isis in Iraq and Syria – where German aircraft are so far only flying reconnaissance missions – and to invest in Iraq to help it fight the causes of extremism.

He also argued the continent has failed to adequately address the consequences of globalization that are putting millions out of work and creating political space for divisive extremist movements.

That's a particular bone of contention for many Eurozone countries which have grumbled at German-enforced fiscal discipline in the years since the 2008 financial crisis.

“If neither the burdens nor the benefits of our economy are being fairly distributed, it's no wonder that people rise up and reject globalization,” he said.

Responding to globalization doesn't just mean investing in infrastructure and research to create new jobs – something European countries have cut back on as they battle to limit budget deficits – but also fighting tax evasion and spreading wealth fairly, the President added.

And he warned against the siren voices outside the EU – including making a thinly-veiled attack on Russian President Vladimir Putin – that are backing extremist movements that could undermine democracy in European nations.

“We should be suspicious of those who claim to have the interests of the EU at heart, and yet don't practice the very values that are essential to Europe, that have made freedom in Europe so real,” Obama said.

“We have to uphold our values not just when it's easy, but when it's hard,” he concluded, before stepping off the stage to a standing ovation.

Although the US leader's intervention last week appears to have tilted Britain's EU referendum debate slightly in Cameron's favour, a series of intractable challenges remain on the table.

Chancellor Merkel's credibility is on the line over the EU's refugee deal with Turkey, which has succeeded in slashing the numbers arriving, but provoked outcry over the EU's perceived indifference to human rights abuses by the government in Ankara.

The EU-US TTIP trade agreement is labouring in the face of stiff headwinds from public opinion, especially in Germany, where thousands turned out to protest against it at the weekend.

And both Italy and France continue to struggle with weak economic growth and intractable youth unemployment, which stands at 39 and 25 percent respectively according to Statista.

It's unlikely that any of these overlapping crises will be resolved before Obama leaves the Oval Office in January 2017.

But the President appears to be determined to place a capstone of battling for an EU-US led international order on his two terms in office.

Whether his enduring popularity among European peoples pushes leaders on the Old Continent to heed his words remains to be seen.