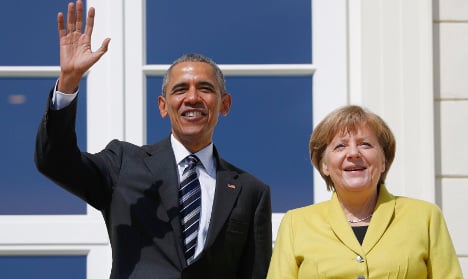 Obama jetted into the northern city of Hanover from London, where he warned Sunday that it would be a “mistake” to send Western troops into Syria and cautioned Britain on reduced global influence should it quit the EU.

While his fifth and final official trip to Europe's biggest economy is expected to cover global crises, one of the headline goals is to advance negotiations on what could become the world's biggest free trade agreement.

Both sides say they aim to see the Trans-Atlantic Trade and Investment Partnership (TTIP) finalised, at least in its broad outlines, before Obama leaves office in January.

However Merkel's Economy Minister Sigmar Gabriel cast doubt on those ambitions Sunday, warning the deal “will fail” if the United States refuses to make concessions in the protracted talks.

“The Americans want to hold fast to their 'Buy American' idea. We can't accept that. They don't want to open their public tenders to European companies. For me, that goes against free trade,” Gabriel, a Social Democrat who is also Germany's deputy chancellor, told business newspaper Handelsblatt.

His comments came a day after tens of thousands of people marched against the US-EU free trade deal through the streets of Hanover, where Obama and Merkel are to open what is billed as the world's largest industrial technology fair on Sunday night.

Before he left for Germany, Obama told the BBC the United States would continue efforts to broker a transition deal between the Syrian regime and its moderate opponents to end the bloody civil war, but warned against “simple solutions”.

“It would be a mistake for the United States, or Great Britain, or a combination of Western states to send in ground troops and overthrow the Assad regime,” he said.

Rather, he called for “international pressure” on “all the parties, including Russia and Iran, who, essentially, are propping up Assad”.

In the same interview, Obama reiterated his warnings about a so-called Brexit, saying “Britain would have “less influence globally” if it voted to leave the European Union in June.

During Obama's seven years in office, the Democrat US president and the conservative German chancellor have grown closer and Obama sees her, among European leaders at least, as first among equals.

“I consider Angela one of my closest partners and also a friend,” Obama told the Bild newspaper. “I've worked with her longer and closer than any other world leader, and over the years I've learned from her,” he said.

Obama's two-day visit kicks off with talks with Merkel and a joint news conference.

It will wrap up Monday with a keynote speech in which Obama is expected to frame his vision of transatlantic relations, and a meeting with Merkel and the leaders of Britain, France and Italy.

For Obama, the trip will be an opportunity to burnish his legacy and bolster Merkel, whose fortunes at home have been hit by her handling of the migration crisis.

Critics say her openness to refugees only accelerated the vast flow of people coming from Syria and beyond.

“I believe that chancellor Merkel's approach to the refugee crisis — and that of many Germans — has been courageous,” Obama said, voicing an opinion heard less often in Germany than Merkel would like.

Despite the diplomatic niceties, the relationship between Obama and Merkel has also had its rocky moments.

Merkel has backed austerity as the remedy to European sovereign debt crises, while Obama came down firmly in favour of short-term spending to buy time and a way out of the morass.

Officials admit US-German relations hit a low when it emerged that the US government had been tapping Merkel's phone.

But they also point to the Ukraine crisis as a turning point that helped both leaders begin to work in tandem.

Merkel, according to Obama, “has been essential to maintaining European unity against Russia's aggression against Ukraine”.

Yet Germany's strength as a partner in Europe has its limits.

“Germany is not of any military use to the United States: it pays too little into NATO and does too little militarily,” said Josef Braml, an analyst at the German Council on Foreign Relations.

“Where they take us seriously is as a European leadership power, and an economic power. And in that sense, we are not just a partner but a competitor. That's why they spied on us.”