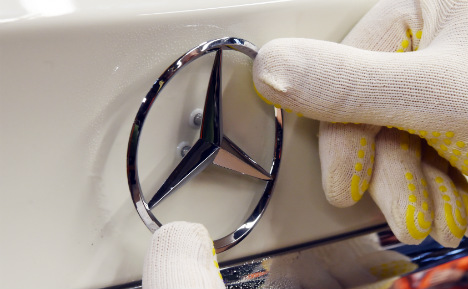 Daimler shares were down 5.5 percent at €52.98 shortly after trading opened, after Daimler said late Thursday that it was launching an internal investigation “into its certification process related to exhaust emissions in the United States upon the request of the US Department of Justice (DOJ).”

Investors were also disappointed by a sharp drop in profits in the first quarter, even if Daimler insisted it was sticking to its full-year earnings target for 2016.

The US Justice Department asked Daimler on April 15th “to review its certification and admissions process related to exhaust emissions in the United States by way of an internal investigation,” the company statement read.

The company said that a recent collective lawsuit against the company for allegedly using a “defeat device” to cheat the emissions regulations in the US has no basis in truth, Spiegel reports.

In April owners of BlueTEC Mercedes diesel engined cars filed the suit, claiming that the cars eject nitric oxide at levels 65 times the legal limit at temperatures under 10 degrees Celsius.

The German ministry of transport recently conducted testing on cars from several major automakers, including Daimler and Volkswagen, and found that many of them did not comply with regulations on nitric oxide emissions below certain temperatures.

The results, which were seen by the Süddeutsche Zeitung, have not yet been made public.

In announcing the internal probe late Thursday, Daimler said it was “cooperating fully with the authorities.”

“Daimler will consequently investigate possible indications of irregularities and of course take all necessary actions.”

Volkswagen said on Thursday it had reached an agreement with regulators to offer “substantial compensation” to US owners of some 480,000 illegally polluting diesel cars.

'On a successful path'

Daimler said in a statement that its first-quarter profits slumped due to falling sales of two of its main model ranges.

But the carmaker was nevertheless confident for the whole year.

“Daimler is on a successful path. Our growth in unit sales clearly shows that we are following the right strategy and have the right products in the market,” said chief executive Dieter Zetsche.

“The model offensive is continuing at the same speed. We will continually improve as the year progresses and will make 2016 into another successful year for Daimler,” he went on.

In the three months to March, bottom-line net profit fell by 31 percent to €1.35 billion in the period from January, “impacted primarily by a life cycle-related decrease in unit sales of the S- and E-Class at the Mercedes-Benz Cars division.”

Underlying or operating profit was down 26 percent at €2.1 billion, while sales edged up two percent to 35.0 billion euros in the three-month period, Daimler said.

Looking ahead, Daimler said it expected group sales to “increase slightly in the year 2016.”

In regional terms, the strongest growth was anticipated for Asia and Western Europe, “but business volumes should grow also in the other regions,” it said.

In terms of earnings, “on the basis of the anticipated market development and the planning of the divisions, Daimler assumes that [underlying earnings] will increase slightly in 2016.”

Daimler said its new E-Class model, to be launched this month, but also the C-Class convertible being launched later in the year, would contribute to growth.