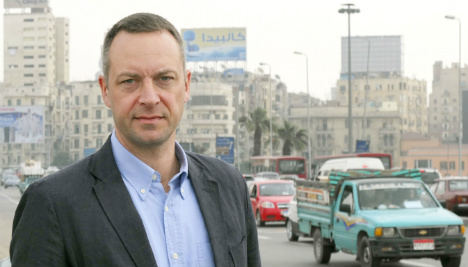 Authorities have yet to give Schwenck any reason for refusing his travel into the country, ARD's tagesschau website reported.

“My travel into Turkey has been refused. There's a black mark against my name. I'm a journalist. Problem?” the Cairo bureau chief and Middle East expert wrote on Twitter early on Tuesday.

Schwenck had been planning a trip to the Turkish-Syrian border, where he hoped to speak with refugees fleeing the war in Syria.

Turkey's frontier with its war-torn neighbour have increasingly come into focus in recent days as NGO Human Rights Watch reported that border troops were using live rounds to scare refugees away.

Amnesty International has also accused Turkey of illegally expelling Syrian asylum seekers across the border, forcing them to return to their war-torn country.

“Our colleagues in Ankara and Istanbul are in contact with the responsible Turkish authorities and the person affected,” the German Foreign Ministry tweeted on Tuesday afternoon.

Schwenck isn't even the first German journalist to land in the Turkish government's sights.

In March, news weekly Der Spiegel's correspondent in Istanbul, Hasnain Kazim, was forced to leave Turkey when his press accreditation was not renewed.

Sources told him that “if I stayed in the country, it was conceivable that I would be prosecuted under false pretences,” he wrote.

While Bormann rejected the idea that the move against Schwenck was linked to the case of TV satirist Jan Böhmermann, the connection is very likely to be drawn by commentators at home.

Pressure from the Turkish government on German journalists will feed attacks on Chancellor Angela Merkel's decision on Friday to allow prosecutors to examine the case against the comedian for insulting Turkish President Recep Tayyip Erdogan.

Critics of that decision said that Merkel was undermining press and artistic freedom at home to appease Erdogan.

The Turkish President is critical to an EU deal under which Ankara has agreed to take back people who travel into Europe illegally via Turkey – and to send bona-fide Syrian refugees from its own camps to Europe in return.

Human rights campaigners say that the deal doesn't meet legal requirements that all asylum applications should be examined thoroughly before a decision is made.