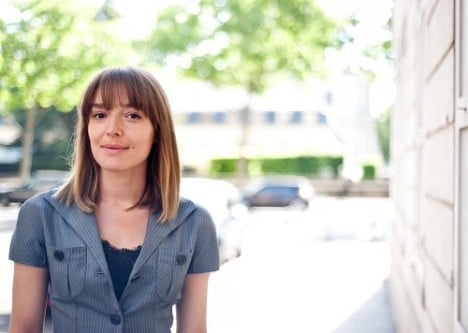 Words like ”home” and ”nationality” become ambiguous when you live, work, and study in not just multiple cities, but different countries with distinct and varied cultures.

“I was born in St. Petersburg, I grew up largely in the UK, and now I live in Paris,” says Maria Kuts. “My life has always been very international.”

Kuts studied in Russia and moved up the career ladder very quickly. But she wanted more.

For one, she had her eye on broader horizons – perhaps working in Europe after many years in St. Petersburg.

But primarily, Kuts wanted to grow. She wasn't satisfied with the skills and knowledge she had, even after her fast-track, hard-working career.

“Doing business management in Russia for six years, I realized that I was seriously lacking financial knowledge,” she says. “I would tell colleagues, 'We need to do something like this' – and they would tell me that those structures already existed. I just didn't know anything about it.”

So she started doing her research. And the solution was clear, basically from the beginning.

“I decided to enrol in Executive IMBA at the International School of Management,” she says.

The International School of Management (ISM) was founded in the United States in the 1990s – but it's been global from day one.

That's why ISM has programmes in Paris, New York, Shanghai, New Deli, Sao Paulo, and Cape Town – and that's one reason why the school has attracted students from more than 100 countries.

“The maximum class size is 25, and in that group there will typically be some 10-15 nationalities represented,” Knight says.

For Kuts, the international nature of the school was a critical deciding factor.

“I knew my education had to be international – because I am international,” she says. “Most of my life I have lived between different cities.”

She's not alone. Knight notes that the school is a natural choice for expats.

“It's a perfect fit for expats in Europe,” she says.

“On a simple level, most of us working at ISM are expats in Europe. Our staff understand the practicalities of studying outside of your home country, and our professors are experts in the nuances of international business. But also, the education is very individualized and customized.” The school offers international MBA, DBA, and PhD programmes, all of which are designed for ambitious professionals who want to study without putting their careers on hold.

“I couldn't take a break in my career,” Kuts says. “Things move very quickly in Russia. I had my BA when I was 20, my Masters at 22, and was in a top position by 25, and I couldn't pause that and come back. So I needed something flexible.”

Students can set their own pace and work from various locations as well as doing seminars online.

“It’s almost completely customizable,” Knight explains. “Each student has control over where they are studying and when. This is a very new and innovative way of completing a degree programme, and a trend that ISM is leading.”

Seminars are primarily given over three-day periods in Paris, but the IMBA degree also requires two weeks of study in New York.

“New York was amazing,” Kuts remarks. “We got a really American approach, and the professors were all business executives. The students were totally engaged.”

Find out more about the International School of Management

Students also have the option of completing an intensive two-week seminar period in some of the world's emerging economies and up-and-coming business hubs, including Shanghai, New Delhi, Sau Paulo, and Cape Town.

“Some students come to Paris one-two times a year, then do two weeks in the summer in New York, and then go to Sao Paulo or Cape Town the following year,” Knight says. “They can make it fit however they like depending on their own schedules.”

Kuts says it's a true highlight of the programme.

“At ISM you really get the knowledge that you're searching for, since you can choose your own courses and pace,” she says.

Of course, the open-ended nature of the programme can also be a challenge.

“You do need a lot of discipline and self-motivation,” Knight says. “At ISM you don't follow a fixed plan that has already been set up. All the courses and resources are available, but you have to do the work yourself.”

For Kuts all the hard work certainly paid off. She just so happened to meet her husband in her ISM class – but she also became much better at her job.

“I’m much more organized and can calmly manage things step by step in situations where I used to overreact.”

Thanks to her international education she has also become better at multinational deals – a key part of her career.

“Now if our company does a deal between France and Russia, I know how to make their tax people happy, and ours happy, too,” she laughs.

But above all, the IMBA at ISM opened the world to Kuts in a way that her previous education never could.

“Getting this degree is what allowed me to succeed in Europe,” says Kuts, who now lives and works in Paris.

“It really does make a difference. With my degrees from St. Petersburg I would have had to go through extremely complicated recognition processes and I may not have been able to work.”

Even for someone like Kuts, who has country-hopped almost since birth, an international education is priceless, she says.

“You might have a brilliant education from one university, but if that's it, you will still be culturally centralised somewhere,” she explains.

“Once you have this international experience and education you look at the world, and business, differently. And these days it's almost impossible to succeed without that international perspective.”