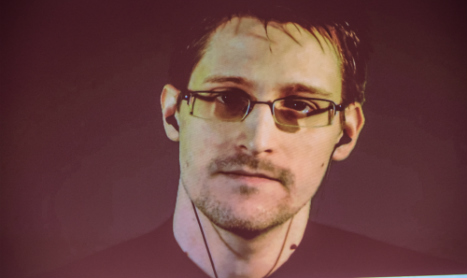 “It's very remarkable that he exclusively published files about the work of the NSA with the BND [Germany's foreign intelligence service] or the British secret service GCHQ,” BND head Gerhard Schindler told Focus magazine.

“Leaking the secret service files is an attempt to drive a wedge between western Europe and the USA – the biggest since the Second World War,” Hans-Georg Maaßen, head of Germany's domestic intelligence agency (Verfassungsschutz), told Focus in the double interview.

German intelligence has come under particular scrutiny in the wake of Snowden's leaks about surveillance by western intelligence agencies, particularly his former employers at the National Security Agency (NSA) and their allies in friendly nations.

A parliamentary committee of inquiry was set up to probe NSA activities in Germany, which has already heard evidence from Schindler about the BND's co-operation with US spies.

It emerged in 2015 that the BND had spied on companies, businesspeople, and political figures in Germany and allied European nations on behalf of the American intelligence agency.

And the parliamentary inquiry itself has not been immune from spying, with its head reporting hacking attacks against his phone – which was then tampered with in the post on the way to IT security experts.

Nevertheless, the spy chiefs say that Snowden presented a one-sided picture of surveillance which they claim spared the blushes of the Kremlin and other less democratic nations.

“It's remarkable that there were no publications about countries like China or Russia, which are main targets for intelligence work by the NSA,” said Maaßen.

There is “evidence that the Kremlin uses every opportunity to discredit Germany. Disinformation, infiltration, seeking influence, propaganda and degradation,” the domestic spy chief went on.

Russian spying, including attempts to recruit MPs' aides or political foundations, had penetrated as far as the Bundestag (German parliament), he went on.

A hacking attack whose source is not yet publicly known also took down the Bundestag computer network last year, forcing the government to spend millions rebuilding the system.

Maaßen further claimed to Focus that he now has more people working on compiling documents for parliamentary inquiries “than in the area of Islamist terrorism”.

Whistleblower Snowden has been in hiding in Russia since 2013, saying that he is reluctant to return to the USA for fear of prosecution and lifelong imprisonment under espionage laws.

Critics in the USA and abroad say that his revelations have weakened western defences against terrorism and foreign spying by revealing the extent of communications surveillance and the techniques used by democratic countries' intelligence agencies.

But Snowden supporters accuse spies and their political masters of undermining basic democratic freedoms in secret with mass surveillance programmes that the public would never have agreed to in an open debate.