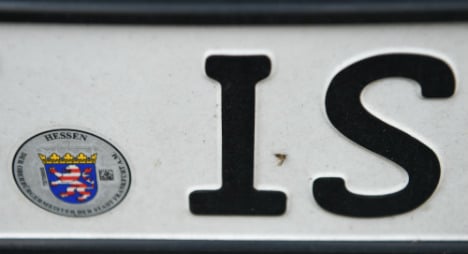 Marburg, a town of a quarter million inhabitants in Hesse, has stopped putting the letter combination IS into licence plates – a decision which goes for personalized as well as generic plates.

The reason for this decision, taken by the licence issuing authorities in the town, is that IS stands for Islamic State – the name of the brutal terrorist organization commonly known as Isis.

“After the Paris attacks of November 13th last year, we decided to no longer issue this letter combination,” Marian Zachow, a Marburg town councillor, explained in a statement.

“On the one hand this decision was arrived at out of respect for the victims of the terror attacks, but also because the town is currently hosting around 4,000 refugees who have fled from the ‘Islamic State’,” Zachow added.

The Marburg authorities say they also don’t want to be able to give supporters of the group the chance to secretly show off this allegiance by displaying the letters.

Research by DPA has shown that no other town in Hesse has yet followed suit. Although Fulda told the press agency that “it is a proposal that is certainly worth considering.”

Banning certain letter combinations on licence plates is nothing new in Germany.

According to Spiegel, authorities are in a constant struggle with neo-Nazis to prevent them from secretly signalling their allegiance with coded messages on their cars.

Visitors to Hamburg might be mistaken for thinking that the city’s neo-Nazis are rather brazen and that, belying the city’s liberal reputation, they seem to be everywhere.

But the HH at the start of every licence plate in the city does not in fact stand for Heil Hitler, but rather “Hansestadt Hamburg” – a reference to the Hanseatic League trading network founded by German merchants that stretched across northern Europe from the 15th to the 19th centuries.