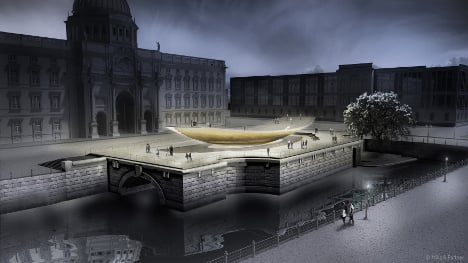 Plans for the "Freedom and Unity Monument" in Berlin. Photo: Milla&Partner/dpa.

The announcement came after the budget committee of the Bundestag or lower house of parliament withdrew its support for the 10-million-euro monument to freedom and unity, pointing to cost overruns of 50 percent.

Culture Minister Monika Gruetters condemned the commission's decision, saying it would come as a blow to the “many enthusiastic supporters and promoters who initiated and accompanied the project for years”.

The decision to build the memorial was taken by the Bundestag in 2007, on the 18th anniversary of the fall of the Berlin Wall on November 9th 1989.

The winning design was a 50-metre-long tilting steel dish, which was designed to rock when people climbed into it.

But the project was hobbled from the early stages after remnants of an earlier monument to Kaiser Wilhelm were discovered at the site, followed later by a colony of rare bats.

Technical problems further ratcheted up the costs of the bowl, which was to be inscribed with the words “Wir sind das Volk, wir sind ein Volk” (We are the people, we are one people).

The first part of the inscription echoes the slogan shouted by demonstrators in former east Germany in the weeks leading up to the fall of the Berlin Wall.

The conservative Die Welt weekly expressed disappointment over the abandonment of the monument, calling it “an embarrassing failure”.