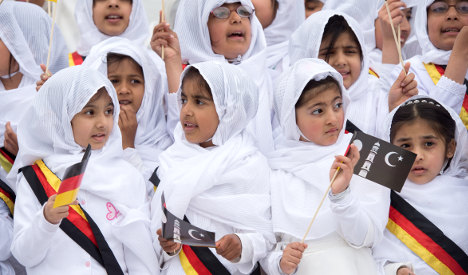 Girls waving German flags in Hanau, Hesse, at the opening of a mosque there. Photo: DPA.

Christian Social Union Secretary General Andreas Scheuer told newspaper Die Welt on Wednesday that he wanted to enact an “Islam law” that would stop the financing of mosques from abroad and better integrate Muslims.

“We must more vigorously and critically come to terms with political Islam, because it prevents people here from being integrated. Therefore we need an Islam law,” the conservative Bavarian politician said.

He especially called for an end to the “financial support of mosques and kindergartens” from places like Turkey and Saudi Arabia.

Scheuer went on to explain how imams should be educated in Germany and “share our fundamental values”.

“It cannot be that other, partially extreme value systems are imported here,” Scheuer stated. “German must be the language of mosques.”

Scheuer also said that “enlightened” Europe should cultivate its own form of Islam.

“We cannot on the one hand bring an integration law under way and on the other close our eyes to what what is being preached in the mosques and by who,” the CSU leader said.

Scheuer even suggested that those who do not properly integrate should be punished or even deported for things like “not taking integration or language classes” or not regularly attending such classes.

“Whoever does not integrate themselves cannot stay here,” he continued.

“We must stop with this integration romance. Multiculturalism has failed. Whoever is not integrated must deal with leaving this country.”