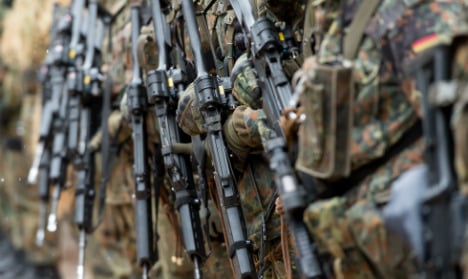 A rank of soldiers from the Bundeswehr (German army). File photo: DPA

“The Bundeswehr [German army] should not be used as a cheap reserve of personnel for the police, who perhaps have been too sharply reduced in numbers,” MP Hans-Peter Bartels, the lawmaker responsible for oversight of the military, told the Nordwest-Zeitung on Wednesday.

Soldiers can only be deployed inside Germany on a temporary basis to aid with disasters such as floods under current constitutional rules.

But using soldiers as a permanent supplement to the police inside Germany would be against the Constitution, and would be asking soldiers to do jobs they aren't trained for, Bartels, a Social Democratic Party (SPD) politician, said.

Bundeswehr troops are already “at their limit in many areas,” he added.

German forces are currently present at sea in the Mediterranean and Aegean, off the Horn of Africa, as well as on land in Kosovo, Turkey, Lebanon, Iraq, Afghanistan, Sudan, South Sudan, Mali, Liberia and Western Sahara as part of UN, NATO and EU operations.

But conservatives from Chancellor Angela Merkel's Christian Democratic Union (CDU) and their Bavarian allies the Christian Social Union (CSU) have repeatedly called for the Constitution to be changed to allow soldiers to be deployed at home.

“I think it's important and necessary that in exceptions we can also deploy the Bundeswehr internally,” Bavarian Interior Minister Joachim Herrmann of the CSU told the Münchner Merkur on Wednesday.

He said that “emergencies” in Germany – such as terrorist attacks resembling those in Paris or Brussels in recent months – would be grounds for weakening the country's historic division between military and police tasks.

But the Social Democrats say that they will not back changing the Constitution – which requires a super-majority of two-thirds of MPs – to allow military deployments at home.

“Implementing the authority of the state is and remains the job of the police,” SPD defence spokesman Rainer Arnold told the Kölner Stadt-Anzeiger on Tuesday.