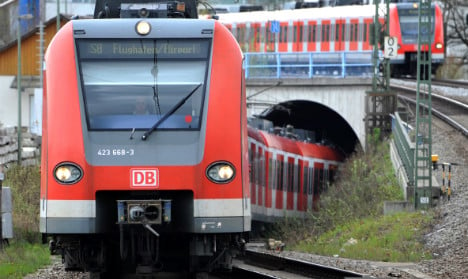 The 22-year-old fell onto the track bed at the Isartor S-Bahn station early on Sunday morning, federal police in the Bavarian capital said.

Video footage shows him sitting on a bench, then getting up and staggering along the platform at 6.19am before his collapse onto the rails.

While he did not fall into the rescue trench between the rails, he was lying by the tracks in such a way that he wasn't in danger of being struck by oncoming trains.

But his ordeal was just beginning, as he had fallen off the platform at a spot close to the tunnel exit where it was difficult for oncoming train drivers to see anything on the track bed.

“The man lay 20 metres outside the tunnel exit. Train drivers still have problems at that point with the transition from the dark into the light,” federal police spokesman Wolfgang Hauner told the Süddeutsche Zeitung.

Surveillance camera footage examined by police showed that the man lay there for around ten minutes as three trains passed by him before a fourth train driver finally spotted him.

Not all of the cameras can be monitored in real time from the station's control centre, meaning that security personnel were unaware that the man was lying by the rails.

He was brought unconscious to hospital with “life-threatening injuries”, including several broken bones and bleeding in his brain, police said.

The S-Bahn itself experienced long delays between the Ostbahnhof and Pasing stations before traffic returned to normal at around 9.30am.