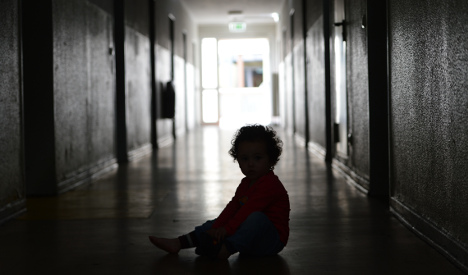 A child sits in a refugee home in Hesse. Photo: DPA.

The mass influx sparked a backlash in Germany – which has since reintroduced temporary border controls and taken other steps to reduce numbers – and in eastern Europe, where a string of Balkan countries in early March shut their borders to refugees flocking in from Greece.

De Maiziere also said that an EU-Turkey agreement to stop refugees crossing by boat to EU member Greece had “got off to a good start”.

The March 18th accord sets out measures for reducing Europe's worst migration crisis since the Second World War, including the shipping back to Turkish territory of migrants who land on the Greek islands.

In return, Turkey is allowed to fly batches of Syrian asylum seekers straight to EU member countries and is slated to receive benefits including visa-free travel for its citizens to Europe.

“The number of asylum seekers who have come to us to request asylum and refugee status fell markedly in the first quarter,” De Maiziere said.

The numbers for January-March were down to 170,000 compared to over 500,000 for October-December 2015, he said, citing data from the government's EASY initial registration system.

But he warned that “despite the positive development, it is too early to give a prediction for the full year”.

“We don't know … whether alternative routes will emerge, especially Libya-Italy, and how Italy would respond,” the minister cautioned.