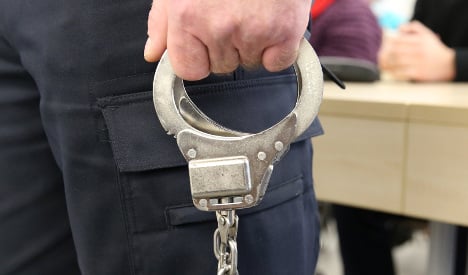 File photo and a police officer with handcuffs. Photo: DPA.

Federal prosecutors said in a statement that the 41-year-old accused identified only as Ibrahim Al F. had been detained in the western region of Westphalia on a German arrest warrant.

“The accused is strongly suspected of treating people entitled to protection under international humanitarian law cruelly and inhumanely in the autumn of 2012 during the Syrian civil war,” prosecutors said.

Ibrahim Al F. is believed to have led a 150-man district militia in Aleppo belonging to the Islamist rebel group Ghuraba al-Sham, then part of the Free Syrian Army, a loose coalition of opponents to President Bashar Al-Assad's regime.

These included repeated plunder after the withdrawal of government troops from parts of Aleppo, including the looting of valuable art that the accused later tried to sell.

“Two residents who tried to protect their neighbouring district from plundering are believed to have been captured by the accused and his fighters and held for several days at a makeshift prison under their control,” prosecutors said.

The two prisoners were “tortured repeatedly in the accused's presence and by him personally”, as were six other people who were later kidnapped by the militia, the prosecutors said.

Some of the hostages only gained their freedom by paying ransoms, the prosecutors alleged.

The suspect was to see an federal investigating judge who was to decide whether he would be remanded in custody.