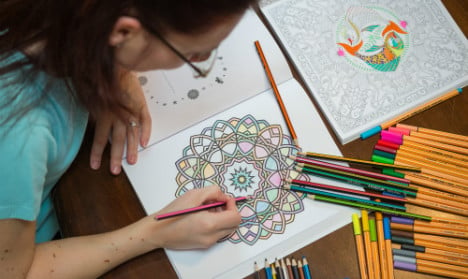 Grown-ups are increasingly taking a step back into their childhood, grabbing a crayon or colouring pencil and sitting intently in front of a colouring book.

It’s billed as being good for the soul – but there are also definite upsides for the German companies who manufacture coloured pencils.

Nuremberg-based Staedtler is one of them, and the craze has definitely not cut stress levels among workers at the company's factory.

The machines are turning round the clock, with three shifts working 24 hours a day, six days a week to meet demand.

“We have plans for expanding our resources. Right now we’re working at our limit,” a spokesperson told Spiegel Online.

Competitor Stabilo-Schwan, meanwhile, told Spiegel that they had enjoyed double-digit sales growth due to the “worldwide mega-trend of colouring”.

Until recently, both companies were looking anxiously at a digital, touchscreen future where pencils would be demoted to a niche interest. They were working on apps and digital pens. Now they can get back to what they know best.

Meanwhile, German publishers have also sprung into the new market with gusto, rushing out new books for colouring-mad consumers to pencil their way through.

One, “Mein geheimer Garten” (My secret garden) by Johanna Basford is one of the best-selling colouring books for adults, with over 1.5 million copies sold. The cover of a Tandem colouring book “Come to calm: de-stress from everday life with peaceful images.” Image: Tandem Verlag

“We’ve been publishing colouring books for the last two years. It’s a very successful branch for us,” Steffi Brune, spokeswoman for publisher Tandem, told The Local. “For our autumn programme, there will be more than 15 new titles.”

The books invite stressed-out colouring fans to turn their hands to shading in castles, flowers, trees, and anything else that can lull the brain into standby mode.

“Apart from mandalas, Germans mostly love to colour nature and animal motifs. They are bestsellers because of the emotions they convey.” Brune says.

The colouring trend has its origins in France, Britain and the USA, but has long since spread to Germany.

“It shows how great the need is for people to be creative in these stressful times,” Brune explained.

“Many of our consumers try to find a haven in creating something new that relaxes them at the same time.”