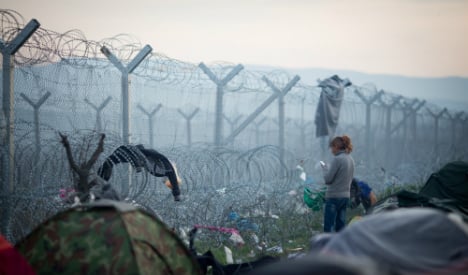 A woman stands among tents at the border fence on the Greek-Macedonian border at Idomeni. Photo: DPA

The survey by French pollsters Ifop found that while 60 percent of Italians were against Schengen – an agreement which allows people to travel within the EU without showing a passport – across the Rhine the number of French people wanting borders closed was as high as 72 percent.

It shows that the terror attacks in Brussels and Paris “stoked the feeling that things have escalated out of control,” Ifop opinion research director Jérôme Fourquet told the Süddeutsche Zeitung.

“Before, people always said that an end to Schengen would mean the beginning of the end of the whole EU,” Fourquet went on.

But despite the de-facto controls now in place on many European borders since autumn, “Europe isn't falling apart,” he added.

Meanwhile, almost half of Germans surveyed – 47 percent – said that it would not be possible to take in any more refugees given the number already present.

While the figure has grown from just one-third in September 2015, Germans were less likely to agree that there was no more capacity than either the Italians or the French. Polling results for selected questions in the Ifop survey. Image created with Datawrapper.

More than 60 percent of both Italians and French people contacted by the pollsters said there was no further possibility of taking in migrants.

The figures contrast sharply with the public responses when asked if countries have a 'duty' to take in those fleeing war and hardship.

When that question was put, 72 percent of Germans agreed – joined by 56 percent of the French and 69 percent of Italians.

Germans' self-confidence about the nation's economy may have a lot to do with the smaller numbers rejecting taking in more refugees than in France and Italy.

While 61 percent of Germans agreed that their country was financially strong enough to cope with the migrant crisis, just 28 percent of the French and 24 percent of Italians were so confident.

Meanwhile, there were similar levels of concern among the public in the three countries that terrorists had infiltrated Europe by disguising themselves among the refugees.

With 79 percent of Germans now believing that some migrants may be potential terrorists, numbers are similar to those in France (80 percent) and a little behind those in Italy (84 percent).