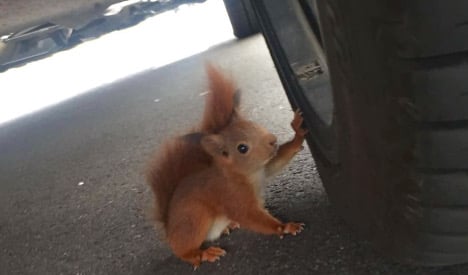 One of the problematic squirrels officers encountered. Photo: Rhein-Erft-Kreis Police.

Police were called out by two drivers in distress on Sunday in Hürth, North Rhine-Westphalia.

Two drivers reported that they were stuck in the middle of the road and had not been able to move further because two squirrels had hidden themselves under their cars and would not leave, police reported on Sunday evening.

At first, police checked the date to make sure April Fools' Day had already passed.

Reassured that it had, police dispatched a patrol car to the scene to find that in fact, two bushy-tailed rodents had made themselves at home underneath the cars.

Police reported that the tree-dwellers seemed to perk up at the sight of their uniforms and gave officers their full attention.

The officers then pronounced a dispersal order to the squirrelly squatters and the pair hightailed it out of there – but not before the officers managed to snap a mugshot of one of the furry felons.