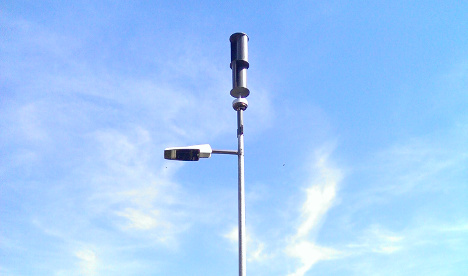 The blustery shores of Juist in the North Sea certainly have no shortage of wind, which has given the island reason to launch a new energy-saving pilot project.

In the next two weeks, the island will be setting up the first wind-powered street light created by a designer based in Schleswig-Holstein, Peer Langemak, a spokesman from Juist told The Local on Monday.

Langemak and his team “noordforce” spent a year and a half developing the lamps after the designer noticed how many sparsely-populated towns still lacked proper public lighting. But these towns also had long periods of little sunlight, like in the North, a spokesperson from noord force told The Local.

“A solar-powered solution would not be suitable for these places,” noordforce's Anna Wätjen told The Local. “Many communities were asking about solutions and Langemak thought up the idea of wind-powered street lights.”

The LED lights are not powered electrically, but rather have batteries that reach full charge after half a day of winds at level 4 on the Beaufort scale, which is just a moderate breeze. After that, the battery power can last up to ten days during a lull in air currents, according to noord force.

But a windless span of ten days is not quite conceivable in the North, noordforce says.

While even the weakest of zephyrs can power the lamps, they are also tough against storms, the group says, as well as “whisper quiet” and dirt- and vandalism-resistant.
Juist will build the first lamp to see how it performs and then could set up as many as ten by the end of the year, depending on costs, Eilhard Küpker from Juist's construction planning authority told The Local. The island could also replace old models with the new design as they need fixing over time, if the project goes well, Küpker added.
Each lamp costs less than €4,000, and will also save cities on the cost of running cables through the ground, Wätjen said. The group also hopes to add emergency call spots to the lamps and cell phone charging stations.
Germany a 'highly innovative' global example

A similar design for street lights was launched in Spain's Catalonia region last year, including along Barcelona's beach, using both wind and solar power.

But these street lamps are the first of their kind in Germany, the German Wind Energy Association (BWE) told The Local, and show great potential for future applications.

“The wind-powered street lamps are a good example of how wind energy can be used creatively and how local communities can participate in the Energy Transition,” BWE spokesperson Wolfram Axthelm explained to The Local, referencing Germany's Energiewende policy, or transition to renewable energy.

The design could be especially beneficial for poor, rural areas that still lack infrastructure within Germany, or even elsewhere in developing countries, Axthelm said.

“Because the technology is not dependent on a power line system, it is also particularly interesting for rural areas around the world,” he explained.

“This development has a good chance to become an important contribution towards lighting streets and pathways, especially in rural areas. These wind-powered lamps can also provide more security for important tourist infrastructure, for example bike paths or on waterways.”

In fact, noordforce already has plans for expansion, hoping to ultimately set up 3,000 lamps across Germany. The group even have requests from as far away as South America, South Africa, Namibia, and Iran, as well as Sweden and the Netherlands.

“This shows that Germany is a highly innovative place where such ideas and concepts can be tested out and brought to the market,” said Axthelm. “The opportunities for energy transition have still not been exhausted in many areas.”