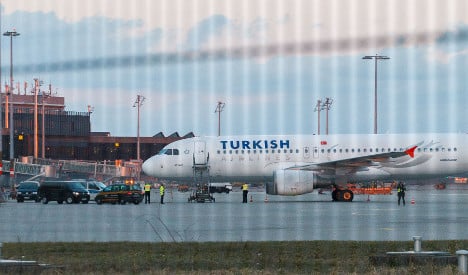 The 16 asylum seekers flew into the northern city of Hanover and were to be taken to a refugee shelter about 140 kilometres away. A second group of Syrians was to arrive in Hanover around midday, the official added.

A German Interior Ministry spokesperson said last week that most of the arrivals on Monday would be families with children.

A representative from the Federal Office for Migration and Refugees, who did not give her name, asked reporters to respect the privacy of the asylum seekers, who were members of three families. An AFP reporter saw five children among them.

“This is all very new, very difficult,” she said. “They have been travelling for a very long time.”

Under the scheme agreed with the EU last month, one Syrian refugee will be settled in Europe legally in return for every migrant taken back by Turkey from EU member Greece, which has faced the biggest influx in recent months.

All irregular migrants who have landed on the Greek islands since March 20th face being sent back to Turkey – although the deal calls for each case to be examined individually.

The deal has run into strong criticism from human rights groups who question whether the agreement is legal and ethical, fearing individuals will be denied the right to claim asylum.

The NGO said its research in the south of Turkey suggested the country was forcing around a hundred Syrians to return home on a daily basis.

Turkey – which has taken in 2.7 million Syrian refugees since the conflict began in 2011 – has always vehemently denied that any Syrian is forced to go home and insists its “open door” policy remains in place.

Germany last year let in a record 1.1 migrants and refugees but Chancellor Angela Merkel has come under intense pressure to stem the flow.

German officials have said they expect other EU member states to begin taking in refugees under the pact with Turkey from Monday.

Greece also on Monday sent back a first wave of migrants to Turkey under the pact. As of Monday morning, one ship had already arrived in the Turkish coastal town of Dikili laden with mainly Pakistani immigrants, according to Turkish state news agency Anadolu.

Two ships had set sail from Lesbos carrying a total of 136 people, Anadolu reported. Another ship was also on its way carrying 66 people from Chios, according to Greek officials.