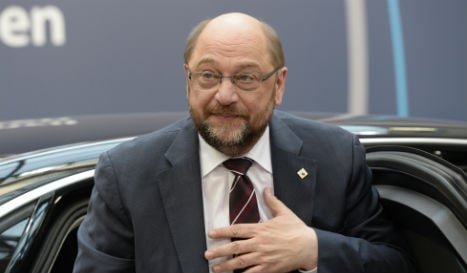 Martin Schulz arrives at the European Union summit on March 17. Photo: Thierry Charlier/AFP
Under the controversial agreement, Turkey is due to take back illegal migrants from EU member Greece from Monday, when it will also start an orderly resettlement programme of Syrian asylum-seekers to the 28-member bloc.
Turkey has received EU financial aid and other concessions, but Schulz, speaking to Germany's Bild am Sonntag newspaper, said Europe must give no ground to President Recep Tayyip Erdogan when it comes to fundamental freedoms.
Schulz said Erdogan “went one step too far” when his government called in Germany's ambassador last month over a satirical TV programme that mocked the leader, demanding it be pulled off the air.
“It is unacceptable that the president of another country demands that we restrict democratic rights in Germany because he feels he was caricatured,” said Schulz, a German citizen.
“We must not be silent on violations of fundamental rights in Turkey just because we are cooperating on the refugee question,” he said.
“On the contrary, we must denounce these violations and permanently stay in discussions with Turkey on freedom of expression and human rights issues.”
However, speaking of the refugee deal, he said “I am optimistic that the distribution will work.
“All EU countries have agreed to this scheme. Germany alone is ready to accept 40,000 refugees, France 30,000 and Portugal 10,000.
“And once we have managed to distribute a first group in the EU, I am confident that it will work from then onwards.”
Schulz predicted that “in 2016, we will not feel the same pressure as last year”, when more than one million asylum seekers arrived in Germany alone.
“The ceasefire in Syria has now held for more than two weeks already. This is a record,” he said.
“The IS (Islamic State group) terrorists are being driven back,” he said, adding that new aid money had also improved conditions in refugee camps in Jordan and Lebanon.