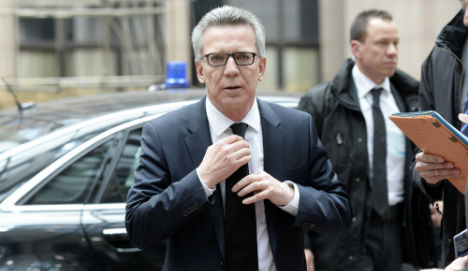 THIERRY CHARLIER / AFP
A controversial EU-Turkey deal goes into effect on Monday under which Ankara has pledged to take back migrants from EU member Greece, while it plans to launch orderly transports of Syrian asylum-seekers to the 28-member bloc.
Germany — which took in more than one million refugees and migrants last year — has already seen arrivals drop sharply to an average of 140 a day on its Austrian border, said Interior Minister Thomas de Maiziere.
“I can say with a great deal of caution that the peak of the refugee crisis is behind us,” de Maiziere was quoted as telling the Tagesspiegel am Sonntag newspaper, speaking weeks after Balkan countries closed their borders to the wave of migrants.
The German minister added however that “there are still some questions that we must answer”.
“This includes the implementation of the negotiated agreement achieved with Turkey, but also a search for solutions in case of possible alternative routes, such as via Libya and Italy,” he said.
“If, once more, more people come via this route, we will need to search for similar solutions as we did with Turkey and also enter into negotiations with North African countries,” he added.
“I could imagine reception centres in North Africa for refugees who are returned from Italy, and in turn a humanitarian admission programme with the North African country in question,” he said.
He cautioned however that much “hard work” would lie ahead before any such programmes may be agreed.