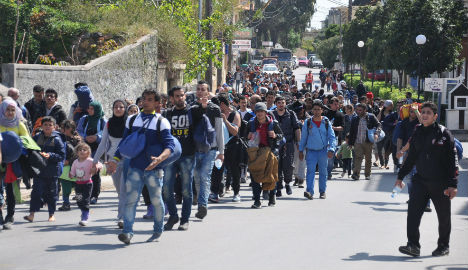 A group of more than 500 refugees on April 1 broke out of a camp on the Greek island of Chios. Photo: picture alliance / dpa
German interior ministry spokesman Tobias Plate said that most of the arrivals expected on Monday would be families with children, putting the number in the “double-digit range”.
Under the scheme agreed with the EU last month, one Syrian refugee will be settled in Europe legally in return for every migrant taken back by Turkey from EU member Greece.
With uncertainty surrounding the returns, tensions flared in Greek refugee camps, just as Amnesty International accused Turkey of illegally forcing groups of Syrians to return to their conflict-torn country.
Meanwhile three migrants were hospitalised Friday after a brawl in a camp on the Greek island of Chios, aid groups and media said.
Police used stun grenades to restore calm during the late-night fight — the second such incident within two days in Greece — which caused serious damage to the island's Vial camp, including the medical dispensary, state ANA news agency said.
Medical charity Doctors of the World (MDM) said it had pulled out of the camp to protect its staff.
“The dispensary was almost entirely destroyed and security was no longer sufficient,” MDM spokesman Evgenia Thanou told AFP.
Around 700 refugees and migrants on Friday were heading towards another camp in the main town of Chios under police escort, state TV ERT said.
Pro-migrant activists said the trouble began after a demonstration Thursday evening by migrants demanding they be allowed to leave the camp.
Meanwhile Amnesty said that the alleged forced repatriation of Syrians showed the “fatal flaws” in the migrant deal agreed with the European Union.
The rights group said its research in the south of Turkey suggested the country was forcing around a hundred Syrians to return home on a daily basis.
Turkey — which has taken in 2.7 million Syrian refugees since the conflict began in 2011 — has always vehemently denied that any Syrian is forced to go home and insists its “open door” policy remains in place.
Ankara has yet to comment on the latest accusations from Amnesty.
Under the EU pact, all irregular migrants who have landed on the Greek islands since March 20 face being sent back to Turkey — although the deal calls for each case to be examined individually.
Athens has struggled to manage the influx, while hundreds of migrants have drowned crossing the Aegean from Turkey to the Greek islands.
Over 51,000 refugees and migrants seeking to reach northern Europe are already stuck in Greece, after Balkan states sealed their borders.
Hundreds more continue to land on the Greek islands on a daily basis, despite the EU deal, which was approved by the Greek parliament in a vote Friday.
The law was supported by members of the ruling majority which includes the far-left Syriza while the main opposition New Democracy party voted against the law but in favour of the arrangements under the EU-Turkey agreement. The neo-Nazi Golden Dawn voted against.
Many of the details of the pact remained unclear but a European Commission source told AFP that Greece hoped to send 500 people back to Turkey Monday “barring a last-minute problem”.
The German ministry's Plate confirmed earlier that the figure was likely to amount to “several hundred”.
Aid groups have criticised the agreement, warning that the Greek registration sites would become de facto detention centres for people slated to be sent back to Turkey after risking their lives and spending a small
fortune just to reach Europe.
They have also raised concerns over the conditions migrants face back in Turkey, where most have been forced to fend for themselves given limited space in the country's refugee camps.
Germany let in a record 1.1 million migrants in 2015, around 40 percent of whom were Syrians fleeing their country's brutal civil war.
Chancellor Angela Merkel, under pressure at home and abroad for her welcoming stance toward refugees, brokered the EU agreement with Turkey as part of a bid to slow the influx to the bloc.
Plate said the first group of Syrians brought in under the scheme would likely arrive in the northern town of Friedland.
In Rouen in northern France, meanwhile, an administrative court on Friday ordered the evacuation of illegal migrants from camps near the ferry terminal in the port of Dieppe.
Eye witness Ginette Poullet of the humanitarian group Itinerants Dieppe told AFP workmen moved in and cleared “the remains of three encampments”.