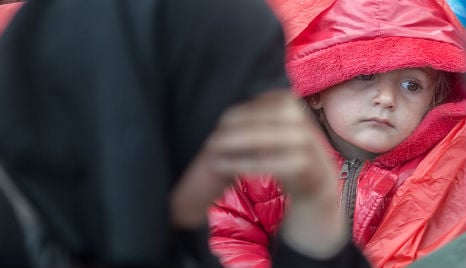 The scheme is slated to start on April 1st and will provide funds to remodel refugee camps with protected spaces for women and children, the Ministry for Families, Seniors, Women and Youth (BMFSFJ) said in a statement on Thursday.

Municipal authorities will be able to access the cash in zero-interest loans from the government-owned KfW development bank.

“Unfortunately we know that children and women in the camps are not safe from abuse and sexual assault. That's why we have to make sure that they're protected,” junior minister Ralf Kleindiek said.

“Not only measures regarding staff, but also structural measures have to be implemented such as lockable accommodation units and separate sanitary facilities.”

“For the children and adolescents we also need designated rooms to enable play and learning,” he said.

On top of the loans, the ministry plans to co-operate with UNICEF to train staff and provide information to people in over 100 refugee facilities.

And €4 million will be spent on specialist centres to provide counselling and other services to survivors of trauma and torture.

The dark figures of sexual abuse

In 2015 alone, Germany registered 1.1 million newly-arrived asylum seekers as Chancellor Angela Merkel kept borders open while many of the country's EU neighbours were closing theirs.

But living conditions and protection for refugees in the Federal Republic have not always lived up to the rhetoric about welcoming those fleeing war and persecution.

Though neither BMFSFJ nor the Federal Criminal Agency (BKA) provide figures on the incidence of sexual abuse in German refugee camps, there is anecdotal evidence of large numbers of incidents.

In a camp in the Hessian town of Gießen, 15 cases of sexual assault against women had been reported by September 2015, according to Die Welt.

“So far, we only know about individual cases. But we assume that there is a number of unreported cases,” BMFSFJ spokesperson Verena Herb told The Local.

“Many of the women in the camps are scared to speak out about what is happening – many of them are for example scared to be sent back home because of it.”