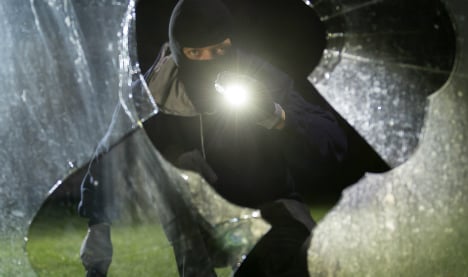 While the figure has been climbing steadily since the late 2000s, the change from 2014 to 2015 was much larger than the previous year.

Hamburg and North Rhine-Westphalia saw the largest increases, at 20.2 and 18.1 percent respectively.

Increasing numbers of thefts from people's homes were described as “worrying” by Interior Minister Thomas de Maizière when he presented the 2014 figures last May.

Police who spoke anonymously to Die Welt said they believe many of the culprits belong to organized gangs from eastern Europe who cross borders to commit crimes before fleeing home with their loot.

A spokeswoman for the Federal Investigations Agency (BKA) told The Local they would not comment on the leaked figures.

“It can't be allowed that a criminal gang commits a string of break-ins in Saxony, then travels on to North Rhine-Westphalia and no-one in the police there knows about the previous crimes,” DPolG chairman Rainer Wendt said in a statement.

The overall number of crimes recorded by police in Germany increased by 4.1 percent to 6.33 million.

It has been higher than six million since 2010 – although in the past ten years the figure has been “relatively consistent,” varying by only a couple of percentage points per year, policing policy expert Hans-Gerd Jaschke of the Berlin School of Economics and Law (HWR) told The Local.

“The theory that crime is going up can't really be demonstrated” from police figures alone, he added.

Meanwhile, 2015's proportion of cases solved by investigators has increased to 56.3 percent – 1.4 percentage points more than 2014.
'Don't rush to judgement'
The idea of cross-border gangs is a “completely plausible” one, Professor Jaschke said.

“The likelihood of being caught by police is very low if you disappear immediately,” he said.

But Jaschke cautioned against overly simplified interpretations of the figures, noting first that they record reported crimes, rather than actual crime – which could be higher or lower than official numbers.

Secondly, “we have to treat these as local statistics,” he insisted.

By drilling down into the reports from each precinct and directorate (the two lowest levels of the police hierarchy), officers can target their resources more effectively, suggested.

That makes more sense than combining all the figures for very different districts, cities and federal states and trying to draw conclusions for policing across all of Germany, Jaschke explained.

Politicians and officers should ask: “Is a drug scene being built up here, or illegal prostitution there, or trading in illegal cigarettes? Then there are concrete requirements to be addressed,” Jaschke argued.

That kind of nuance may be lost in the public debate, where calls for tougher sentencing and more police from conservatives and police unions often resonate more strongly.

More than 900,000 crimes were attributed to non-citizens in the statistics – an increase of almost half over the previous year.

Factoring out crimes related to people's asylum claims and residency rights cuts that figure to 555,820.

Some of those status- and border-related crimes increased especially quickly, with the number of illegal entries into Germany reaching 154,188 – an increase of more than 210 percent over 2014.

There was also an increase of 157 percent in infringements against asylum or residency law, to 402,741.

The statistics do not confirm fears that migrants and refugees in Germany would commit large numbers of sexual crimes.

This is another figure that must be treated with caution, as a large proportion of women who fall victim to such crimes do not report them.

“Women who don't want to endanger their family or who have many other reasons may shy away from the police,” Professor Jaschke said.

He noted that only when the sexual assaults and robberies committed by members of a large crowd of largely north African and Middle Eastern men in Cologne and other large cities on New Year's Eve were widely reported in the media did large numbers of women come forward to the police.

Concern about sexual assault has grown in Germany since the events of New Year's Eve.

Many citizens equipped themselves with pepper spray and blank-firing pistols, while there were moves online to organize “Bürgerwehr” (citizens' defence) vigilante groups in some cities, an idea firmly condemned by police.