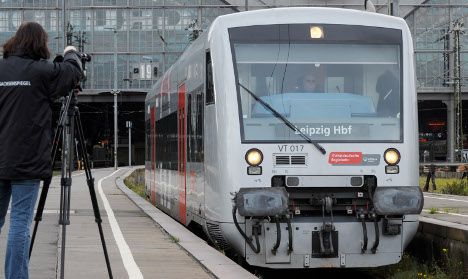 One private regional train operator said last week that one of its train lines will offer the option for women travelling by themselves or with children to sit with other women.

But the optional seating arrangement, offered by Mitteldeutsche Regiobahn (MRB), is not as novel nor far-reaching as some international headlines make it seem.

1. Just one private company has made the offer, not all German railways

First of all, the offer is just for the line travelling between Leipzig and Chemnitz in eastern Germany and is optional rather than mandatory, a spokesperson from MRB told The Local.

Each train along this line will have in the coming weeks two seating areas for women and travelling mothers, located next to already designated quiet zones and customer service sections.

2. 'Nothing to do with sexual harassment'

Many have speculated that the new offer is a response to the mass reports of sexual assaults against women on New Year's Eve in Cologne and elsewhere.

But the company has insisted that the section for female travellers is simply in line with what other rail operators have already offered for some time.

An MRB spokesperson told The Local that the company created the sections at the request of families, seniors and women travelling alone with children.

“The proposal for this came from passengers who want more privacy,” the spokesperson told The Local.

“It has nothing to do with sexual harassment,” an MRB spokesperson told broadcaster MDR last week. “This is an extra service offer, using the examples of the Austrian train system and the ICE and IC train operators.”

Which brings us to the third point:

Deutsche Bahn, whose single shareholder is the German government, offers a “ladies compartment” on the City Night Line overnight sleeping cars for women travelling by themselves.

A Czech rail operator in 2012 also rolled out a women's only section where men could also sit, unless the women there said no, and Austrian operator ÖBB also has ladies' sections.

About 15 years ago in Switzerland, the train operator SBB tried a similar pilot project for female-only compartments, but it was used very little and they decided against continuing it, according to the Süddeutsche Zeitung.

4. And it's not just trains that have offered women-only spaces

Since the 1990s, various regions around Germany have put in “women's only” parking spaces which were well-lit, monitored by security cameras and closer to car park exits after female drivers expressed concern about sexual assault.

Women's parking spaces at places like Frankfurt Airport are also larger, which some say is based on the stereotype that women are bad drivers.

News of the train company's offer has set off a storm of debate online about whether such compartments are effective safety measures, whether they discriminate against men or men of a certain ethnicity, or whether they are simply not enough to stop everyday sexism.

In response, the German hashtag #imzugpassiert (it happened in a train) has started trending on Twitter with women sharing examples of times they felt harassed while travelling.

“I travelled with two 13-year-olds. It was hot and they both wore short dresses. A man by the corridor held his phone and took pictures under their skirts,” wrote one Twitter user.

“Women's compartments mean 'the world belongs to men and they are allowed to move freely through it. For women, there are special spaces.' #NotOKAtAll,” wrote another.