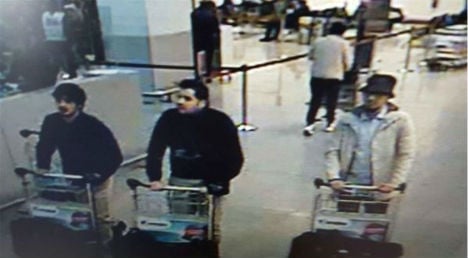 The Brussels attackers captured on security camera footage in the minutes before the attack at the Belgian capital's airport. Photo: DPA

After the terrorist attacks in Brussels on March 22nd killed 35 people, fear of terrorism has once again taken centre stage across Europe.

So far though, the Bundesrepublik (Federal Republic) has been spared from misery – often thanks to the Bundeskriminalamt (BKA), Germany's own version of the FBI.

Since the turn of the millennium, 11 planned terrorist attacks on Germany have been averted by the federal agency, BKA chief Holger Münch told Bavarian broadcaster Bayerischer Rundfunk on Tuesday morning.

“We can see from the past that Islamism is also present in Germany. Our current situation is not just luck, but also due to good cooperation between the security forces.”

Though the last terror attack on German soil dates back to 2011, when two American servicemen were shot dead at Frankfurt airport, the 54-year-old takes the threat seriously.

“Europe, including Germany, is among the countries on the target list of Islamist terrorism,” he explained. “We assume that there is a high risk of attack here.”

He concedes that there currently 470 people likely to threaten public safety in the country, “and the numbers have been on the rise in recent years.”

BKA spokespeople supplied The Local with a list of the 11 attacks foiled by the agency.

The most recent blocked attack was uncovered in 2013.

In comparison to its European partners though, the Bundesrepublik has been mostly unscathed.

Germany was a “transit country” with “no direct link” to the terrorists in the most recent attacks, Münch said.

The continent's “terrorism capital”, France, reported 51 attacks in 2014 alone, most of them from separatist groups, a report by the European Union law enforcement agency Europol found.

With 774 terrorism-related arrests reported by Europol in 2014 – the latest year for which full figures are available –  police forces across the EU have been trying to thwart the surge in violence.

In Germany, meanwhile, just 18 people were arrested – despite the country being home to several hotspots for fundamentalist views, including in some districts of Berlin and parts of the Rhineland.

Europe has suffered a number of major Islamic fundamentalist terror attacks on its capital cities since the turn of the 21st Century.

The most destructive came in Madrid in 2004, when 10 bombs detonated on a train in the Spanish capital leaving 191 people dead and 600 wounded.

London suffered a major bomb attack the following year on its Underground metro and bus networks, which claimed the lives of 52 people and injuring hundreds of others.

And Paris suffered the massacre of 13 journalists and cartoonists at satirical weekly Charlie Hebdo in January 2015, prompting a mass outpouring of international support that was tragically repeated in November after a terrorist group killed 130 people with bombs, drive-by shootings and a mass hostage-taking.

One member of the Paris group, Saleh Abdeslam, is believed to have also been linked to the group that carried out the Brussels bombings in March this year and was arrested just four days before the blasts.

Abdeslam reportedly travelled through Germany to pick up suspected accomplices in the weeks before the Paris attacks.

Security sources suggested that he may have been planning attacks in the Federal Republic before his arrest.

SEE ALSO: What we know about extremism in Germany