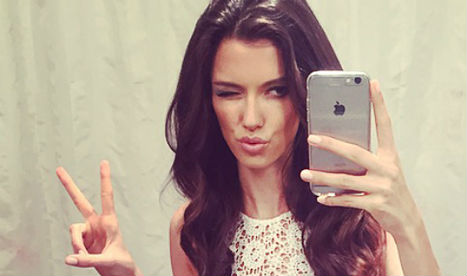 Instagram star Anna-Christina Schwartz became a model armed with nothing but an iPhone - and some sharp cheekbones. Photo: DPA

Becoming a top model back in the 90s meant hanging around in McDonald's as a teenager until out of nowhere an agent would show up, discover you and whip out a contract. At least that's how it went for Brazilian top model Gisele Bündchen.

But these day, aspiring adolescents don't have to wait for someone to launch them to the planet of catwalks and photo shoots.

Happy first day of spring!! #byebyewinter #ootd – – GIVEAWAY WINNER // @Rebelleofficial Gucci Bag: First of all – I am truly overwhelmed by your entries! I love to keep you motivated on a daily basis but what keeps ME motivated are your words full of kindness and love It was super hard for me to choose a winner, also because I didn't expect sooo many beautiful stories. I decided to choose a girl, who not only has a wonderful story but also regularly comments and likes my pictures (I always read through my comments, that's how I know). A big thanks to all of my active followers who not only scroll through my feed but also leave a like or a short comment!!! – The winner is @giuliasauer congratulations

The girl from Karlsruhe, Baden-Württemberg only started using the application three years ago, when most Germans hadn't yet woken up to the trend. Within 12 months, she went from zero to 40,000 online fans.

“My first followers were of course friends and family. Back then, I didn't even realize that I could gain such popularity through Instagram,” she said in an interview with onlinemarketingrockstars.de.

Making it in the world of modelling

Her secret to success is that she “combines different topics while staying just a normal girl” – and her classic mirror selfie.

“They've got nothing to do with photographic talent or creativity, but everyone can relate to that situation and identify with it. Relatability is key,” she explains.

Despite the fact that she finished high school with extremely high grades, she's chosen to pursue modelling over a career at university.

Because top brands yearn for Instagrammers with a broad reach, so called “influencers”, the renowned Pulse Advertising agency now manages her profile.

“Pulse Advertising and I are very selective about the partners I work with. We get between 10 and 20 requests a day, but over 99 percent of those I turn down.”

One of Reif's successes is a permanent contract with fitness tea manufacturer SkinnyMint, which sees her mention the brand in posts and linking to its website.

Though she doesn't disclose her earnings, US fashion Instagrammer Danielle Bernstein, who's got 1.4 million followers, gives an idea of how much the business is booming.

More than just a site for pretty pictures

But Instagram has taken root in the modelling business in multiple ways.

To Vanessa von Minckwitz-Denz, the CEO of Munich agency Louisa Models, Instagram presence is an imperative for aspiring young hopefuls.

“As a model you can apply from all around the world, as an agency you save on costs,” she says.

A photo posted by Anna-Christina Schwartz (@annachristinaschwartz) on Mar 20, 2016 at 6:12am PDT

Anna-Christina Schwartz is another young German fashion star – the 25-year-old has worked for beauty product companies Garnier and Maybelline and even starred in a TV commercial for fashion label Desigual.

Though Instagram has helped her build her career, to her online fame isn't just a selfie away:

“To build up your account takes time,” says Schwartz.. “It's like getting up, brushing your teeth, going to work, having lunch – every day,” she says.