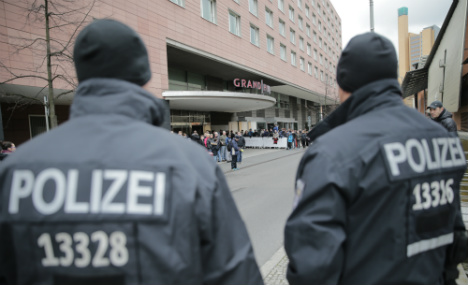 Police outside the Grand Hyatt hotel in Berlin as the national football team arrived on Tuesday. Photo: DPA

The man identified only as Shaas E. M. allegedly joined the Islamist group in 2013 and stayed with them until at least August last year, having “taken part in various military operations” and delivered food supplies for Isis, they said in a statement.

Prosecutors declined to tell AFP when and how the suspect entered Germany, which last year took in over one million asylum seekers, around 40 percent of them from war-torn Syria.

They said there was currently “no evidence of concrete attack plans” and no known links between the suspect and the recent bloody jihadist attacks in France and Belgium.

The suspect was arrested on Tuesday after prosecutors in Potsdam near Berlin laid criminal conspiracy charges, and a judge on Wednesday ordered that he stay in custody on charges of membership of a foreign terrorist organisation.

The teenager is the latest in a string of people to be arrested in Germany in the past week.

One suspected jihadist was picked up at Frankfurt airport last Friday and has been accused of fighting for Isis and appearing in propaganda films.

And three men were arrested in Bavaria on Wednesday after police received a tip-off about a group of men driving from Brussels through Germany with plans to carry out a terrorist attack.

News of the most recent arrest also comes just days after terrorist bombings killed 31 people and injured hundreds in Belgian capital of Brussels.

One German woman has been reported missing following the blasts while security at German transport hubs and public spaces has been stepped up.

SEE ALSO: 'No fear' of terrorism among Berlin train travellers