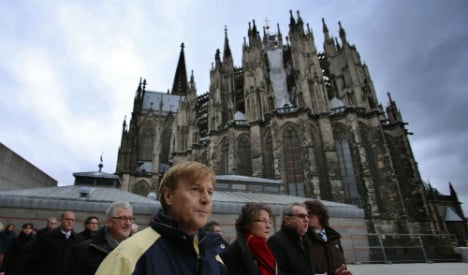 A group of Cologne city representatives at the site of the New Year's sexual assaults outside the cathedral in February. Photo: DPA

A 26-year-old Algerian man is accused of surrounding and groping a woman along with ten accomplices, a spokesman for Cologne's district court said on Thursday. The start date for the trial has not yet been set.

The victim reported being groped on the buttocks and other sensitive parts of the body, the spokesman said.

As well as taking part in the sexual assault, the accused is charged with having stolen the victim's mobile phone from her jacket during the encounter.

But it will take a lot more than that to satisfy the more than 480 people who reported sexual assaults in the cathedral city on New Year's Eve.

Including the sexual assaults, police received a total of 1,100 crime reports in the weeks after the New Year, many regarding petty thefts or violence.

Eyewitnesses and police said that most of the crowd of men involved in the attacks around the cathedral and main train station appeared to be of Middle Eastern or north African origin, making the violence a turning point in Germany's refugee debate.

There was widespread anger at a perceived cover-up by national media and police as news of the events slowly filtered out in the first days of January.

Public outrage eventually toppled the Cologne police chief and has represented a major blow to trust in Cologne's newly-elected mayor Henriette Reker, herself the survivor of a knife attack by a far-right supporter that left her in a coma.

The night has also has prompted the federal government to tighten laws on rape and sexual assault.

So far a number of others have been charged with violence and property crimes, with one man found guilty of petty theft in February.