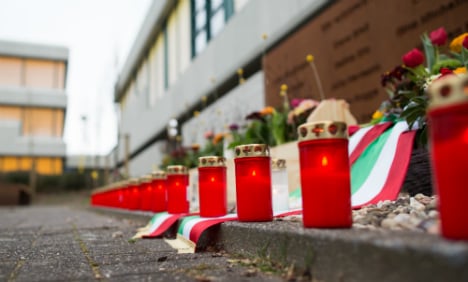 Candles at a school memorial in Haltern am See, North Rhine-Westphalia, which lost 16 pupils and two teachers. Photo: DPA

After a ceremony in the village of Le Vernet, about 80 of them will make a grueling pilgrimage to the crash site at an altitude of some 1,500 metres (4,900 feet).

Aided by volunteer firefighters and mountain guides, they will walk a muddy, snow-covered mountain path, much of it carved out to allow emergency workers to access the site.

A red stake planted in the soil marks the exact site where the plane went down, killing all 150 people on board.

The ill-fated plane took off from Barcelona and was headed to Dusseldorf in Germany when German co-pilot Andreas Lubitz, 27, drove it into the ground on March 24, 2015.

On Wednesday a young German woman had already made a six-hour journey to the site.

Her daughter was one of a group of high school students who were killed in the crash.

“At first, I didn not think I would ever fly again,” she said, asking not to be named.

Meanwhile, by Thursday morning people had already begun laying candles in front of a memorial at the secondary school in Haltern am See, North Rhine-Westphalia, which lost 16 pupils and two teachers in the deadly crash.

Investigations found that Lubitz had a history of depression and suicidal tendencies and the case has raised questions about medical checks faced by pilots as well as doctor-patient confidentiality.

Lubitz was allowed to continue flying despite having been seen by doctors dozens of times in the years preceding the crash.

After the tragedy, the European Aviation Safety Agency (EASA) recommended that airlines ensure at least two crew members, including at least one qualified pilot, are in the flight crew compartment at all times.

Top managers of Lufthansa – the parent company of the lowcost Germanwings airline – arrived in Le Vernet to take part in the commemoration ceremony.

The company – which has denied any wrongdoing – is facing a lawsuit in the United States from family members who argue Lubitz should not have been allowed to fly.

“We are here today to show our respect to the victims and show that we support them,” said Lufthansa chairman Carsten Spohr.

“Today is not the day to talk about legal issues, today we are just here, with 100 Lufthansa employees, to help the families and support them in their grief.”

The ceremony will begin with the reading of the names of the 149 victims in front of a headstone erected in their memory, with a minute of silence at 0941 GMT, the exact time of the crash.

A wreath will also be laid at the Vernet cemetery where the remains of unidentified body parts were buried.

No government officials will take part in what is expected to be completely private memorial.

“The families do not wish for their pain to be filmed,” said local French official Bernard Guerin.

The pilot's family will not be present.

Plans to take relatives to visit the crash site by minibus were called off because bad weather has made the forest road leading to it impassable.

Vigils held in Düsseldorf and Barcelona

The private ceremony comes after anniversary vigils were held in Spain and Germany, home to most of those killed in the crash.

Ceremonies were held at the airports in Barcelona from where the ill-fated plane took off on March 24, 2015, and in Düsseldorf, its intended destination in western Germany.

Plaques in memory of those killed when the airline went down in the French Alps were unveiled at both airports.

At Düsseldorf airport's main terminal, family members of the 72 German victims gathered in a “quiet room” which had been dedicated to the memory of 17 people killed in a fire at the airport in 1996.

Dozens of relatives of the 50 Spanish victims, many dressed in black, attended the ceremony outside of Barcelona's Terminal 2 on the eve of the tragedy's first anniversary.

They were joined by emergency services workers who took part in the rescue operation as well as top officials including Spain's acting Prime Minister Mariano Rajoy.

Flags flew at half mast and 149 candles were lit in memory of the passengers and crew who were kiled.