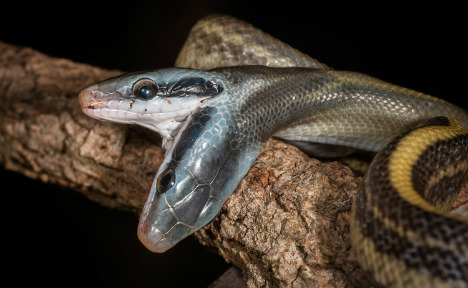 The rattle snake was put on show in an enclosure in the zoo's ape house on Wednesday, although It was born in June 2015 and is already 65 centimetres long and around 65 grams in weight.

“The snake eats independently and catches food with both heads, but only eats with one,” said the curator Antje Zimmermann.

As well as two heads, the snake also has two air and food passages which join further inside its body. In every other respect the animal only has one organ.

“This is a biologically rarity which is very occasionally seen,” Zimmerman said.

The reason for the phenomenon is that – like with conjoined human twins – the fertilized egg only splits partially.

“Depending on where the process stops, the result can be two heads, like with our snake,” Zimmermann said.

“Its really rare, but not completely uncommon that a snake is born with two heads,” Christine Kurrle from Frankfurt Zoo confirmed, adding that conjoined snakes can live into adulthood.