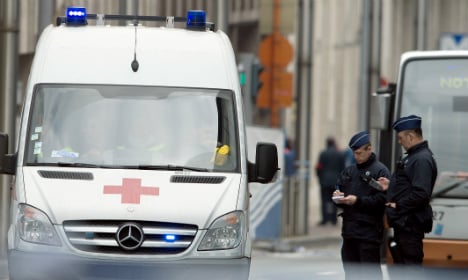 Police stand by an ambulence near the Maelbeek metro station in central Brussels on Tuesday. Photo: DPA

The Foreign Ministry added that it cannot rule out the possibility that some German citizens may be among the dead.

At least one German man suffered serious injuries in the blasts, which hit the Belgian capital's airport and metro system early on Tuesday morning.

So far 31 people have been confirmed killed and around 260 injured by the two bomb explosions at the airport and one in a metro train.

Belgian-born Brahim Al-Bakraoui is believed to have carried out the airport attack shortly after 8 am, along with an unknown second bomber.

A third man pictured in security footage from the airport has yet to be identified or caught, contrary to media reports on Wednesday morning.

Belgian prosecutors believe that Bakraoui's brother Khalid blew himself up in a Metro train at Maelbeek station around an hour later.

Searches of Brussels apartments used by the men have turned up explosives, bomb-making materials and a completed nail bomb.