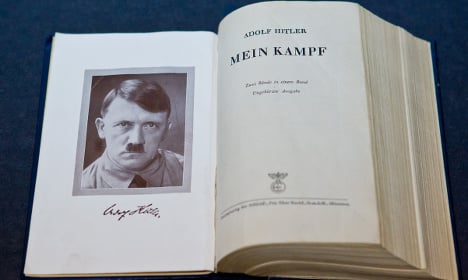 From 1936, the Nazi state gave a copy to all newlyweds as a gift. Photo: DPA

The book, which is bound in red leather, was discovered by US soldiers who liberated Munich at the end of World War II, said Alexander Historical Auctions. It was likely kept by Hitler for his own use or as a potential gift for an admirer, the auction house said.

The flyleaf is signed by 11 officers from a US field artillery battalion of the 45th Infantry Division, the first soldiers to liberate Munich. “From Adolph Hitlers apartment in Munich on May 2nd 1945,” wrote one officer followed by his signature and that of 10 others.

An August 20th, 2015 letter from the daughter of Captain Daniel Allen of the 45th Infantry Division says that her father, who belonged to a field artillery unit, brought the book home with him at the end of the war.

There were more than 10 bidders, on phone and online, and the book sold to an American buyer, the auction house in Chesapeake City, Maryland told AFP. It had been valued pre-sale at $12,000 to $15,000. Hitler wrote the book, whose title means “My Struggle,” in 1924 while jailed for treason after his failed takeover of the Bavarian state government.

The inflammatory tract sets out the political doctrine he enacted as Fuehrer: annexing neighboring countries to gain “Lebensraum” or “living space” for Germans, and his hatred of Jews, which led to the Holocaust.

The limited edition sold today is a 354-page volume II of the manifesto, printed by the Nazi Party's publishers Verlag Franz Eher in Munich, 1927. Millions of copies of the book were published in Germany after Hitler seized power in 1933 until his fall in 1945.

From 1936, the Nazi state gave a copy to all newlyweds as a gift. New copies of the book were printed in Germany in January for the first time since World War II, unsettling some Jewish community leaders, after its copyright expired. For 70 years, Bavarian authorities refused to allow it to be republished out of respect for victims of the Nazis and to prevent incitement of hatred.