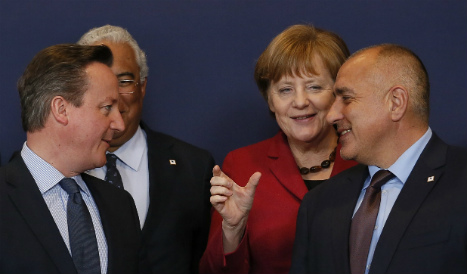 Leaders from all 28 EU nations had gathered to thrash out the details of an offer to Turkey before Prime Minister Ahmet Davutoglu arrives from Ankara later on Friday.

There is a “collective position”, Austrian Chancellor Werner Faymann confirmed.

“We've marked out our positions – and that's not easy with 28 countries and the many differences there are,” Faymann said.

Turkey has been pushing for political concessions in exchange for doing more to secure its coastline, preventing refugees from crossing illegally to Greek islands, and taking back deported refugees from Europe.

As well as taking back deportees, the deal may include provisions for a legal route from Turkey to Europe for Syrian refugees.

But some EU countries are opposed to any new gifts to Turkey, such as Cyprus, which continues to reject Turkish presence on the north of the island.

Others point to the fact that even as President Recep Tayyip Erdogan has demanded EU funding to deal with the refugee crisis and visa-free travel for his citizens into Europe, he has been cracking down on political opposition and press freedom at home.

Nevertheless, Turkey has demanded the opening of fresh chapters of its long-stalled EU accession talks.

Ankara may also receive a further lump sum of cash to care for refugees from Syria already within Turkish borders.

“They certainly won't be easy negotiations” with Prime Minister Davutoglu when he arrives on Friday, Chancellor Merkel said.

But French President Francois Hollande said that he believes EU leaders are “on a good path” – although he could offer no guarantees of a final deal.