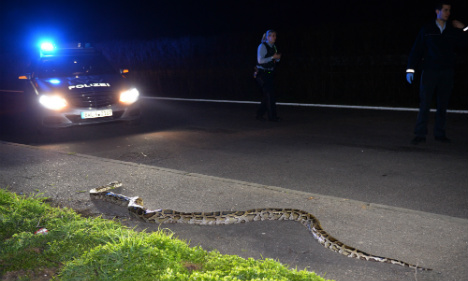 A police car illuminates the giant snake in its headlights. Photo: DPA

The cold-blooded reptile was lying motionless on the asphalt near Lorch in Baden-Württemberg when police arrived at the scene shortly after 7 pm.

But officers were unsure whether the animal was not moving due to the cold, or was in fact dead.

A veterinarian was called to the scene and ascertained that the snake had in fact shuffled off this mortal coil. A veterinarian examines the jaws of the four-foot python found on the road in south-west Germany. Photo :DPA

Police are now trying to find out how the python came to be on the road side.

Pythons are a protected species in Germany and can only be owned with a special licence, Stern reports.