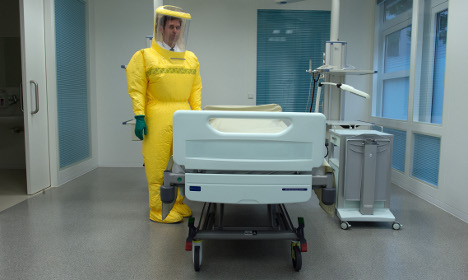 A special isolation ward in Düsseldorf, similar to the ward where the Lassa patient is being treated in Frankfurt. Photo: DPA.

Medical specialists reported on Thursday that the man, from Alzey, Rhineland-Palatinate, is severely ill, but they are still optimistic about his recovery.

The man had worked at a funeral home and had come into contact with the corpse of a dead US citizen who had worked in Togo as a nurse and was then living in Cologne. He had died on February 26th – his cause of death then unknown – and was brought to the Alzey funeral home on March 3rd to be transported back to Togo.

Less than a week later, the Cologne University Hospital discovered that the American had been sick with Lassa. The undertaker had been the only one in contact with the body and tested positive for the virus on Tuesday.

Like Ebola, Lassa fever is an acute viral haemorrhagic illness and is known to exist in West Africa. Symptoms include fever, nausea, vomiting and in severe cases facial swelling, as well as bleeding from the mouth, nose, vagina or gastrointestinal tract, according to the World Health Organization (WHO).

It is often transmitted to humans from contact with items contaminated by rodent feces, though person-to-person transmission can also occur particularly in hospital-like environments “with the absence of adequate infection control measures,” according to WHO.

This is the first case on record in the world where someone contracted the illness outside of Africa, said head of the Frankfurt Health Ministry René Gottschalk. Exactly how the man contracted the Lassa virus from the corpse is still not quite clear.

The WHO reports that fatalities only occur in 1 percent of Lassa cases, though patients with severe symptoms have a 15 percent fatality rate.

The patient was brought to Frankfurt University Hospital late on Tuesday night, and he is being treated in a special isolation ward.

“The patient shows all the signs of a serious viral infection,” said head doctor Timo Wolf.

Wolf added that, when he was brought in the patient was in an early stage of the disease and therefore has a good chance of recovery.

Member's of the undertaker's family have also been taken into the hospital for examination, though doctors said this was just a precaution.

A patient from Sierra Leone was treated in Germany ten years ago for Lassa fever, also at the Frankfurt hospital, though this patient had contracted the illness in the African country.