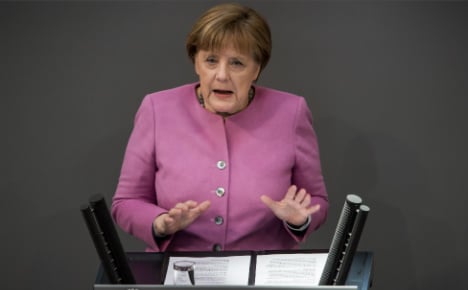 Speaking on the eve of a crucial Brussels summit, Merkel made clear the EU would stand firm on civil rights in Turkey and that Ankara's bid to eventually join the 28-nation club is “not on the agenda now”.

Europe, divided and desperate to end its biggest refugee influx since World War II, is pinning its hopes on a deal with Turkish President Recep Tayyip Erdogan.

Under the plan hailed as a “game-changer”, Turkey would seek to stop refugees' dangerous sea journeys and take back illegal migrants from Greece.

For each Syrian it accepts, it would send one to the EU in a more orderly redistribution programme.

But the proposed deal — which would offer Turkey the carrot of eased access to the visa-free Schengen zone and an acceleration of EU accession talks — has drawn heavy fire on several fronts.

Many critics have voiced unease over human rights concerns in any deal with Turkey, over its arrests of journalists and academics and an intensifying military campaign against Kurdish separatists.

France has warned against attempts by Turkey to strongarm Europe, and Czech President Milos Zeman charged that Ankara's request for billions of euros more in EU aid amounted to “blackmail”.

Merkel, addressing the concerns in a speech to parliament, stressed that no shortcuts would be taken.

Europe would continue to “voice our convictions to Turkey regarding, for instance, the protection of press freedom or the treatment of the Kurds,” Merkel said.

But she also reached out to Turkey, saying she could understand its request for more EU financial aid.

“What Turkey has done for … some 2.7 million refugees can't be praised highly enough,” she said.

“Europe has not covered itself with glory in how, as a union of 28 members states with 500 million citizens, it has struggled with fairly sharing the burden.”

Sounding a hopeful note, Merkel said the EU summit may “reach an agreement that could give us, for the first time, a real chance at a sustainable and pan-European solution to the refugee crisis.”

However, major stumbling blocks remained on the eve of the meeting — the most immediate thrown up by Cyprus, which threatened to torpedo the plan over its territorial feud with Turkey.

European Commission president Jean-Claude Juncker was set to meet President Nicos Anastasiades ahead of the summit to discuss the issue, after EU president Donald Tusk jetted to Nicosia on Tuesday for emergency talks.

The eastern Mediterranean island has been divided since 1974 when Turkish troops invaded its north in response to an Athens-engineered coup attempt.

Turkey does not recognise the Cypriot government, and Nicosia has blocked six key chapters of Ankara's negotiations for EU membership since 2009, effectively halting the process.

Tusk conceded there was “a catalogue of issues” to address before the largest diplomatic push yet to stem the massive influx.

The flow of people into northern Europe has been halted for now as eastern European countries have effectively shut down the Balkans route with coordinated border closures.

This, however, has caused a bottleneck of tens of thousands of migrants in Greece.

Refugees' desperation again became clear this week when some 1,500 made a dash across a river on the Greek-Macedonian border, only to be sent back to the muddy camps and tent cities on the Greek side.

Tusk has admitted the deal needs to be “rebalanced”, and European Commission Vice President Frans Timmermans made clear on Wednesday that, in fact, “there can be no blanket returns”.

“Returns can only take place in accordance with the international and EU legal framework… the case of each person needs to be assessed individually in the light of the charter of fundamental rights and European directives.”

He stressed that “we are not turning our back on the refugees because they will be assured adequate international protection, either in the EU or in Turkey.”