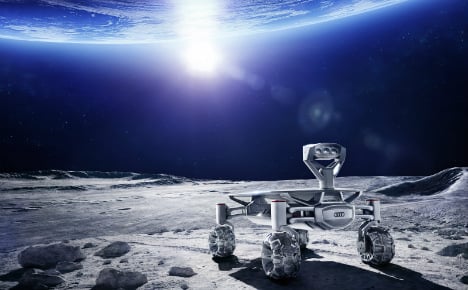 When Google announced in 2007 that it was going to sponsor the first privately funded mission to the moon, a team of European scientists quickly gathered in Berlin to take part.

The rules of Google's Lunar XPRIZE sound straightforward enough: Build a moon rover, then actually send it to the moon, drive at least 500 meters and finally, transmit video and images back to Earth.

At least 90 percent of the mission costs also have to be funded by private sources – but the first team to achieve this historic task will win $30 million.

As if this wasn't enough, Google have sprinkled the race with Hollywood razzmatazz – Oscar-nominated director J.J. Abrams is shooting a documentary on its progress.

There are currently five teams left in the race to the moon and one of them – the Part Time Scientists (PTS) – is based in Berlin.

They have also been able to secure sponsorship from car manufacturer Audi – and Audi is also working with them on elements of the rover design.

Thomas Kunze, software developer at PTS, explained to the The Local that the team name comes from the fact that they are still a part-time operation.

“Our team is called the Part Time Scientists and for most of us, this is a hobby,” he says. “But the core team is permanent workers. Time between work and hobby often is a smooth transition. I would call it a very time-consuming hobby.”

But the 13-man team made up of scientists from across Europe has become more professionalized as time has gone on. They are now a company with international contracts.

“We’ve been working on the project since 2008 and it’s mainly about the mission itself. The competition comes second for us. Of course we would love to win the race, but even if another team is first, we are willing to complete our mission to the moon,” Kunze says.

Other than the motivation of winning the race and earning some good money, the PTS do have a scientific goal for their mission.

They want to reach the moon vehicle Apollo-17, which was left behind the last time a human was on the moon 43 years ago. The site where the Apollo 17 moon vehicle is situated on the moon. Photo: Wikipedia Commons.

“This vehicle is made of things like plastic, leather, nylon and titan-aluminium-mixture. It has been there for a long time now. It will be very interesting to study its decay, and which material survived best. This analysis is our main goal,” team leader Robert Böhme told radio station SWR2.

One of the highest hurdles, though, is finding a way to get their rover 390,000 kilometres to the moon.

Commercial services could make this possible. Russia, India and the American company Space-X are offering to send equipment into space for money.

But the team would still have to find a way of landing their rover on the Earth’s only natural satellite themselves.

“The biggest challenges for us concern financing, time and how to get information. If we want to build an engine or a special microchip for our rover, it's really hard to obtain the know-how.” Kunze admits.

If the part-time scientists want to realize this ambitious dream, they will be working overtime in the coming months.

The deadline for the Google Lunar XPRIZE is the end of 2017. Meanwhile, teams only have until the end of this year to find a contract for a rocket launch.