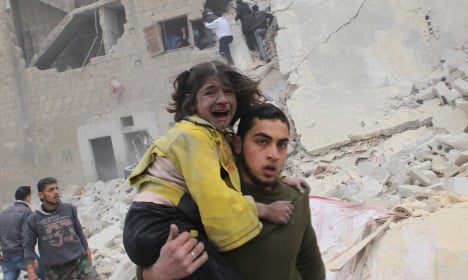 A man carries a crying girl away from a bombing in Aleppo, Syria. Photo: DPA.
1. Population boost as refugees flee danger
A Syrian refugee family in the state of Brandenburg. Photo: DPA.

The Syrian war has driven 4 million people into exile, according to the United Nations. Another 6.5 million have been displaced within the country.

In scenes reminiscent of the treacherous sea journeys taken by hundreds of thousands of Vietnamese refugees at the end of the Vietnam War in the late 1970s, thousands have died crossing into Europe by the Mediterranean.

In Germany, some 1.1 million refugees total were registered as entering the country last year. Of those, more than 428,000 came from Syria.

But it is hard to know the exact number of Syrians who've made Germany their home since 2011.

This would mean a total of nearly 550,000 Syrian refugees.

This number could be too low because it does not include those who have not registered with the government. It could also be too high since registration numbers may include repeat names, people who have left Germany for another country or people who have been deported.

Still, the large number of refugees has been argued by some to be a boon for Germany's future, as its population has been on the decline due to one of the lowest birthrates in the world.

Signs at an AfD rally read “Putin help us” and “Fatal asylum delusions: overestimated, overly infiltrated by foreigners, overly in debt. Who asked you?” Photo: DPA.

The growing might of the hard right Alternative for Germany (AfD) party has given traditional parties pause, with some blaming Chancellor Angela Merkel's refugee policy for the political shift.

Born in 2013, the AfD lurched to the right in the summer of 2015 when party members toppled founder and economics professor, Bernd Lucke.

Since then, the anti-immigration rhetoric of leader Frauke Petry has resonated with followers, even when she has condemned the Catholic Church and suggested using firearms against refugees at the border.

Concerns about growing numbers of refugees from places like Syria have bolstered the party's anti-immigrant stance and helped it secure seats in three state legislatures that held elections on Sunday, winning nearly a quarter of the votes in Saxony-Anhalt.

SEE ALSO: Why German politics as we know it is crumbling

3. Breaking a taboo by sending arms to Kurds Since the Second World War, Germany had a policy against sending weapons to active war zones, but that changed due to the terror group Isis, which has been taking over territory throughout eastern Syria and western Iraq.

In 2014, Germany made the controversial decision to arm the Kurdish Peshmerga fighters in Iraq – though journalists later found out that Kurdish fighters were selling on German guns.

Germany has been taking on a gradually bigger role militarily by getting involved in the fight against Isis, including joining the French air force in Syria following the November terror attacks in Paris.

This kind of military involvement has been novel in Germany, whose Constitution imposes strict limits on deploying military forces given the country's militaristic past. Since the fall of the Soviet Union, Germany has generally had a smooth relationship with Russia, but conflicts in both Syria and Ukraine have renewed tensions between the two countries.

Though the two nations worked earlier this year to broker a deal for a ceasefire in Syria, they continue to butt heads over the conflict.

In February, Merkel issued sharp criticism of Russian air strikes in Syria saying Germany was “horrified in the face of this human suffering”.

Putin's spokesman fired back, saying the Chancellor should be “very careful” about her choice of words.

Soon after, Merkel backed a call from Turkey for a no-fly zone over parts of Syria, the same day that the German air force confirmed Russian aircraft has been shadowing its Tornado reconnaissance planes.

5. Isolation of Germany from its neighbours and EU allies How to handle the refugee crisis has been a contentious subject among European Union leaders from the start, with Merkel pushing for shared responsibility in caring for the refugee population against fierce opposition.

Even some of its closest allies have abandoned Germany, with French Prime Minister Manuel Valls saying recently that he was “not favourable” to a permanent quota system suggested by Merkel to redistribute refugees throughout the EU.

Meanwhile Sweden has implemented border checks, Denmark has imposed checks at the German border and blasted Merkel for “underestimating the scale of the refugee crisis, and Austria has also closed its borders – even suggesting Germany bring refugees from Greece itself.