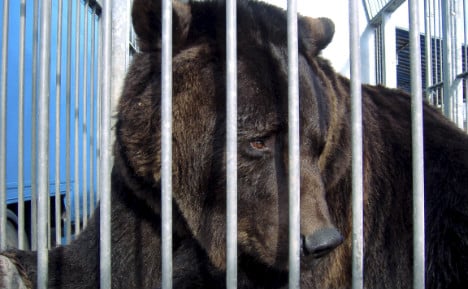 When law enforcement arrived at the scene, fights had already broken out between animal rights activists and employees of the travelling circus.

The dispute was over Ben, a 22-year-old brown bear, who according to animal protection group “Four Paws” is the last travelling circus bear in the country.

The bear’s owner tried to escape with the animal, driving through a fence, with the bear trapped in a trailer behind.

But police were able to secure the cage and took Ben out in the presence of a veterinarian. They did not want to say what would happen with the animal now.

The reason for taking the animal off the circus was that it had been left alone twice within a week, police said.

The region in which the bear was found had also has its own ban on holding wild animals.

On Friday the Bundesrat, the upper house of the German national parliament, will debate whether to institute a nationwide ban on possessing wild animals.

“The seizure of the brown bear Ben is a strong signal against circuses holding wild animals,” Denise Schmidt from Four Paws said.

But she added that there are still hundreds of lions, tigers and other wild animals being held in small circus wagons.

The animals rights group now want to ensure that Ben is brought to a rescue centre in Müritz, northeast Germany, where he can be housed in conditions specially suited to his species.