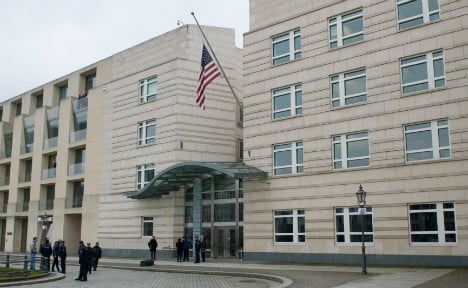 The US embassy in Berlin. Photo: DPA

The man arrived at the embassy, which lies adjacent to the Brandenburg Gate, at 7.25 am, a statement from the embassy reported.

Going to the main entrance, the man handed a guard a US passport and said he wanted to renew it. The guard told him he had to go to consular services and provided him with the address.

Out of nowhere, the man punched the guard in the face, the embassy claim.

The guard pinned then him to the ground and German police came and handcuffed him. But as they dragged him away he yelled that there was a bomb in his suitcase.

According to Bild he also screamed that he wanted revenge for Osama bin Laden, the former leader of terrorist group Al-Qaeda who was killed by US special forces in 2011.

Police immediately closed down the square, which is one of the most popular tourist spots in the German capital.

Once the area had been evacuated, munitions experts sent in a robot to examine the suitcase.

They determined that it was harmless and shortly after nine o’clock the square was re-opened.

Law enforcement say the man is already known to them and has mental health issues. He remains in custody.

In pictures
The square is closed after a suspicious package is found.

A suitcase can be seen outside the embassy doors.

A robot is sent in to examine the suitcase.

Pariser Platz is re-opened after police give the all-clear.