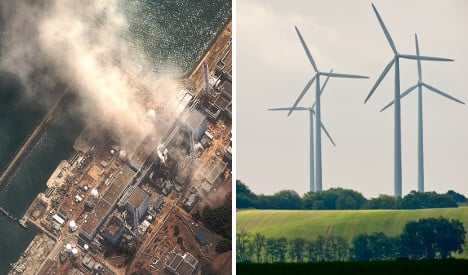 Chancellor Angela Merkel's government cannot boast that the idea of abandoning nuclear energy was its own.

Launched in 2000, it was originally the brainchild of an earlier coalition government between the Social Democrats under Gerhard Schroeder and the environmentalist Green party.

In late 2010, Merkel decided to roll back Schroeder's plans.

But the March 11th 2011 Fukushima disaster triggered a spectacular policy U-turn where Merkel, a physicist by training, ordered the immediate shutdown of the country's oldest nuclear reactors and resurrected plans for a complete phase-out by 2022.

From then on Germany's “energy transition”, under which Europe's biggest economy plans to meet 80 percent of its power needs using renewable sources by 2050, received the world's attention.

“Reactions abroad oscillated between 'an example to the rest of the world' and 'that's not the way to do it',” recalls Patrick Graichen, director of the energy think tank Agora Energiewende.

Other countries, such as neighbouring France, have since decided to emulate Germany's example in the development and promotion of “green” energy.

But “Germany has remained alone in wanting to abandon nuclear,” said former environment minister Klaus Toepfer, now considered an authority on the subject.

Merkel herself admits the energy transition is a “Herculean task”.

There are myriad different aspects to take into consideration, from subsidizing clean energy technologies to the construction of an electricity grid connecting the wind farms on Germany's northern coast to the densely populated regions in the west and south of the country.

An eye also has to be kept on prices: too big a surge in electricity costs would hamper economic competitiveness.

German policymakers have been juggling all of these aspects, to varying degrees of success.

Optimists point out that renewable energy sources accounted for a third of all electricity consumed last year and supply was very firm.

Nevertheless, “there is still work to do on fostering energy efficiency and the grid”, said Graichen of Agora.

Consultancy McKinsey compiles an energy transition index, which monitors the progress made towards the completion of 15 of the project's sub-targets every six months.

According to its latest update earlier this month, “for the first time in over four years, most of the indicators were negative”.

In other words, the realization of several of the energy transition's targets have become “unrealistic”.

Keeping a lid on costs is one of them. According to McKinsey, German households' electricity bills are on average 41 percent higher than in the rest of Europe.

“It's one of the bitter truths of the energy transition: despite the push towards renewables, CO2 emissions are still rising,” said Regine Guenther, of the environmental non-governmental organisation, WWF.

Critics argue that, by focusing on the power sector, Germany has neglected other areas crucial to the fight against global warming, such as heating and transportation.

Making do without coal

Berlin has so far been slow to promote so-called “e-mobility” or electric transportation systems.

In the energy sector, “we now have to address the question of how to make do without coal,” which accounts for 42 percent of the country's electricity production, said WWF's Guenther.

But Berlin is mindful of the jobs that are dependent on the industry, as well as the fate of several big players, especially loss-making coal giant RWE, Europe's number-two power producer.

The weakness of traditional energy companies poses a threat to the proper completion of the nuclear phase-out.

Operators will have to come up with billions of euros to dismantle their nuclear power plants, and no one knows whether the provisions they have set aside will be sufficient or readily available when the time comes.

“The issue of organizing and financing the nuclear phase-out is still not solved”, said E.ON's chief executive, Teyssen.